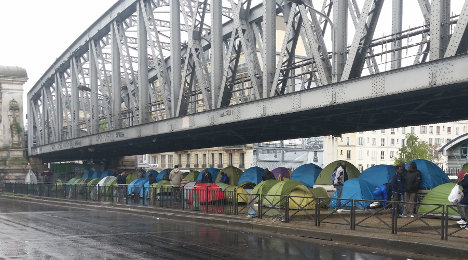 Around 80 tents are home to around 250 migrants near La Chapelle Metro station. Photo: The Local

Any mention of squalid migrant camps in France and most would think of those in and around Calais, but in recent weeks two temporary settlements have sprung up in the heart of the French capital.

They are occupied by almost 500 migrants, mostly from Eritrea, Sudan and Ethiopia.

One is near the Gare d’Austerlitz close to the river Seine and the other is located underneath the overground Metro tracks, just around the corner from the Gare du Nord and the Eurostar terminal.

The site, which is slightly sheltered from the elements by the tracks, is home to around 250 migrants who spend their nights and much of their days huddled in the 80 or so tents that have been provided by charities.

It is not in the most upmarket suburb of the capital, but just a short walk from the Sacre Coeur Basilica and Montmartre.

One of the charities providing basic help and provisions is Emmaus Solidarité, which has been tasked by the Town Hall in Paris with coordinating efforts of all the various humanitarian associations.

"These are people who have experienced tragedy and trauma throughout their challenging migration route,” Bruno Morel, the head of Emmaus, told the Journal du Dimanche website.

“These camps are expanding, but the conditions there are not adequate. We can give initial humanitarian relief, but we need solutions for lodging,” he added. The location of the camp by La Chapelle Metro is handy for the migrants, most of whom are only in Paris as a stop-off point to their final destinations, be it the UK or Norway.

It is close to Gare du Nord, from where they hope to sneak onto a train to Calais, just another stop-off point on their way to the UK.

“I have tried three times to get on a train to Calais, but each time the police caught me and threw me off,” 21-year-old Amanuel, from Eritrea tells The Local (see picture below).

“We try to hide in the toilets, but it’s difficult. We’ll try again. That’s our life for the moment,” he said.

“But we hope it will get better once we reach the UK.” (Amanuel, 21, from Eritrea, pictured here on the left, hopes to make it to the UK)

The migrants rely on charity soup kitchens or the goodwill of passersby to provide them with food and perhaps a little money. Several portable urinals have been set up around the camp and there is a public toilet nearby.

The site is strewn with empty water bottles, tattered mattresses and blankets, left behind by those who have moved on.

Some of the migrants say they have been told they will have to leave shortly as the camp will be closed by the time the summer tourist season starts.

“When people come to Paris, they don’t want to see all these tents,” said one man from Morocco. Most of the migrants have made the perilous journey from the Horn of Africa via Libya and across the Mediterranean via the notorious traffickers’ boats, several of which have capsized in recent weeks leading to the deaths of hundreds of people and increased pressure on EU leaders to make efforts to deal with the crisis.

“We had friends who died on the boats," says Amanuel as others around him nodded or bowed their heads.

“It’s very dangerous. I spent three days on the boat with around 350 people and you don’t feel safe. We know the stories. We all know we may drown.

“But Libya is even more dangerous than the Mediterranean Sea. I spent three months there waiting to get a boat. There are bad people there and they do bad things to women," he said.

“In Libya the migrants don’t live in camps like here. They live on the streets, there’s no food and no water for them,” he said. Amanuel said most people like him had to pay traffickers €1,600 just to get to Libya and then another €1,800 for a place on a boat across the Mediterranean.

They arrive in Paris penniless and without any official papers and most of them with just the clothes they traveled in.

Although they are in the most visited city in the world, for young men like him and his 18-year-old friend Biemnet, they have no desire to explore.

“We just stay in this area, around the camp. We might walk for 30 minutes to a place where we can get a free cup of tea, but that’s it,” he said.

“We are in a new country and we don’t know the city. We don’t feel in danger, but it is very cold,"  said Amanuel, shivering in the Paris rain.

Most of the young men have heard about the conditions for the migrants in Calais, where French authorities have forced them to set up camp on wasteland on the edge of the city.

One aid organisation recently told The Local that it is the “worst refugee camp in Europe”.

They also know the perils of trying to get across the Channel to the UK, with several migrants having been crushed under the wheels of lorries or having suffocated in their holds.

Many ask why the UK makes it so hard for people to get there.

But Amanuel and his fellow migrants are determined to go anyway.

“We need to get to Calais and to England, but it appears there’s no chance". (Tourist buses pass by the camp. But it may be gone by the summer season.)