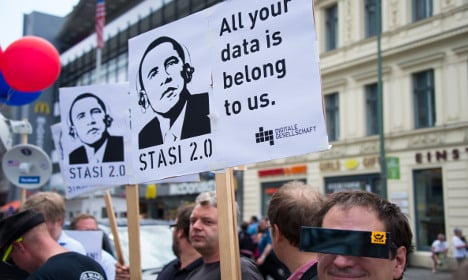 Long portrayed as a victim of snooping by allies, Chancellor Angela Merkel's government has grappled this week with embarrassing reports of German spying on European firms on behalf of the United States.

Citing intelligence agency documents, the Bild daily reported Monday that the German chancellor's office was informed in 2008 during Merkel's first term of German involvement in US economic espionage but did not react.

According to Süddeutsche Zeitung, spying on companies could only have taken place in isolated cases as the United States searched for "information on illegal exports."

"The heart (of the problem) is political espionage of European neighbours and institutions of the European Union," the paper claims, citing a source with knowledge of BND's procedures.

The spying claims could undermine Franco-German diplomatic relations if they prove to be true, but for the moment French officials are remaining tight-lipped about the allegations.

A spokesman for the French foreign ministry said: "We are in close contact with our German partners, who have indicated publicly that will conduct an internal investigation on the elements reported by the press."

The Elysée Palace is yet to respond to The Local's request for a comment.

German Interior Minister Thomas de Maiziere, a trusted Merkel lieutenant who served as chief of staff at the Chancellor's Office from 2005-2009, has offered to provide an explanation next week to a parliamentary committee looking into NSA practices.

However, the opposition has already accused the government of lying for saying in writing April 14 that it knew nothing about any economic espionage by the NSA.

"I reject categorically the assertion that the government has not told the truth," Merkel spokesman Steffen Seibert said Wednesday at a regular press conference.

Germany reacted with outrage at revelations in 2013 by fugitive US intelligence leaker Edward Snowden that the NSA was conducting massive Internet and phone data sweeps, including in Germany.

Analysis – 'France will want to know the whole picture'

Josef Janning, a senior policy fellow at the European Council on Foreign Relations: “Behind the scenes right now there will be intensive negotiations and communication between the German and French counterparts. The French will want to know exactly what was going on and they will be under pressure to get a full picture.

“In the course of these talks there may well be revelations that mid-level French members of the French intelligence services knew what was going on, but it wasn’t passed higher up.

“At a government level the political reflex will be to say we can’t allow these kind of things to develop and we need to counter this with a visible show of cooperation otherwise it will undermine German-Franco relations. They need to be seen as though they are acting together.”

“The revelations won’t mean relations between the two countries will change in substance but it will give them more reason to be in closer contact to deal with these kid of issues.”

“In terms of the public, I doubt they will be shocked by these revelations but nevertheless it will be a politically sensitive subject that could come back up in the future.

“For example if you have a public disillusioned about relations with the US, because of these spying revelations, it may affect the way they see the TTIP free trade agreement between the EU and the US and negotiations could be more complicated.”