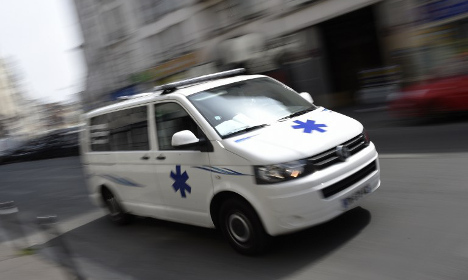 The girl was found dead on the ground outside her apartment. Photo: AFP
The girl, who lived in Stains, in the northern suburbs of Paris in Seine-Saint-Denis, jumped from the fourth floor of her apartment block on Tuesday.
Her parents and siblings were at home at the time, but were unable to prevent the girl from falling to her death.
They told French channel BFMTV that they heard an "loud noise" before finding the girl on the ground downstairs. Police confirmed that she had jumped.
A source close to the case told the channel that the girl had appeared in an intimate video with her boyfriend, a film that was recorded without her knowledge.
The video spread online, and is understood to have been seen by "many people both in the neighbourhood and in her group of friends", the source said. (Stains, north of Paris. Photo: GoogleMaps)
The girl was then blackmailed and bullied by people who had seen the video.
News of her suicide prompted " a new wave of online hate", a source close to the investigation told Le Parisien newspaper.
On Wednesday, a second video about the girl was shared online, this time showing the moments after her death.
The clip, in which a scream can be heard as well as someone urging others to call an ambulance, was posted on Twitter.
A Facebook page set up in her honour has attracted over 12,000 likes in less than a day.
The case has parallels with other cases of young girls who have paid the ultimate price after bullies have gone on the attack.
Amanda Todd in Canada killed herself in 2012 after she was targeted by blackmailers who had access to intimate photos of her. She had posted a YouTube video just a month before explaining the tormented life she was forced to endure.
Url copied to clipboard!