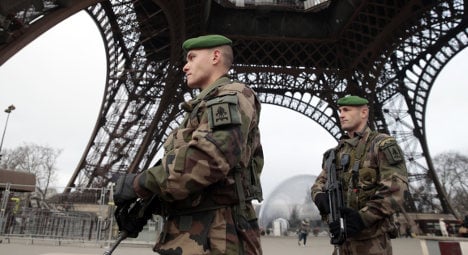 A permanent force of 7,000 soldiers will patrol the streets of France from now on. Photo: AFP

President Francois Hollande announced on Wednesday that France would increase its defence budget by close to €4billion over four years, in response to extremist threats after the Paris jihadist attacks.

He also said that military patrols at sensitive sites throughout France that were set up after the January attacks would be made permanent, with a 7,000-strong force dedicated to internal security.

That means there will be around 3,000 less troops on the streets guarding synagogues, tourist sites and other sensitive landmarks, as there are currently around 10,000 on duty as part of the post terror attacks operation named Sentinelle.

Speaking after calling a defence council, Hollande said the decisions were taken to ensure France's internal security but also the safety of military forces currently engaged in operations abroad, such as in the Sahel region or in the Central African Republic.

"We have the duty to support people who may come under threat, but we also defend our own security," he told reporters.

"It's a significant effort, it's even a very big effort," Hollande said, acknowledging France's ballooning budget deficit and its ongoing quest for growth and jobs.

"I made this choice for France, for its protection, its security, and I know that if they want to have confidence in the future, the French must feel safe everywhere."

In March top counter-terrorism officials warned that the threat of a jihadist attack in France has reached a level "without precedent" and new attacks are inevitable.

"The number of targets has exploded. There are two or three thousand, maybe four thousand, people identified or suspected of evil intentions," one official told AFP on condition of anonymity.

They also warned that stationing thousands of soldiers at sensitive sights around the country would do little to prevent terror attacks.

France's armed forces have been at the forefront of some high profile recent conflicts, most notably the NATO operation to oust former Libyan dictator Muammar Gaddafi and the recent military intervention in Mali against Islamist rebels and in the Central African Republic.

France is also involved in the bombing campaign against Isis targets in Iraq.

Hollande's announcement comes exactly a year after it was announced that France's drive to balance the books would see 20,000 posts deleted from the army by 2019.

In October last year the Minister of Defence announced the scrapping of an artillery regiment and the loss of 7,500 jobs, as the country battles a ballooning budget deficit.