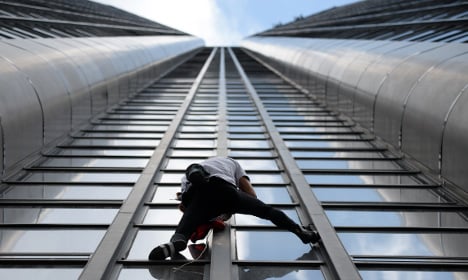 The 53-year-old French daredevil scaled the 210-metre (690-feet) high Montparnasse Tower in the French capital without a security harness in a little less than an hour.

During his climb, he tried to fix a Nepalese and multicolour prayer flags to the building, but these quickly fluttered away with the wind.

Before starting his climb, he said his thoughts went to mountaineers stuck at the Everest base camp, where many died in avalanches triggered by the monster quake that has killed more than 5,000 people and left some 10,000 injured. The Frenchman has climbed some 130 structures around the world without ropes or other safety equipment, setting a record for "most buildings climbed unassisted" according to Guinness World Records.

These include the Burj Khalifa in Dubai, the tallest tower in the world, the Eiffel Tower, Empire State Building, and Kuala Lumpur's Petronas Twin Towers.

It is the third time that he has climbed the Montparnasse Tower.

"If I am still physically in shape, I will be able to climb until 60, 65 years old," Robert said.