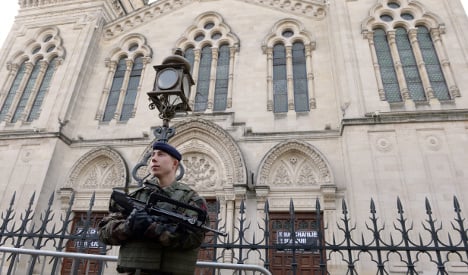 Security was stepped up outside France's synagogues in the wake of the Paris terror attacks earlier this year. Photo: Jean Pierre Muller/AFP

An investigation is underway in France to track down a group of men who allegedly attacked a 53-year-old Jewish man on Saturday as he was leaving the Saint-Ouen synagogue in the Seine-Saint-Denis department north of Paris.

The man, who owns a supermarket and has lived in the area for 15 years, said he was leaving the synagogue with a Rabbi at around 1:20 pm on Saturday when he was pursued by a man aged around 25.

As he walked along Rue du Docteur Bauer the man following him repeatedly called him “dirty Jew”. When he failed to react the attacker spat at him and when he told the man to stop, things turned ugly.

“He head-butted me, I was bleeding everywhere,” the victim was quoted as saying by Le Parisien.

He then spoke of how he tried to defend himself before the attacker was joined by two other men.

“They beat me up. They kicked me in the leg, back and that’s when the first attacker took out a knife. I heard the others saying ‘Go on, stab him, Jew’,” he recalled.

He said he then jumped on his attacker to get him to drop the knife and hit him as people shouted ‘call the police!’

The attackers eventually fled after kicking him in the stomach.

The victim reported the incident on Sunday and police are now working to identify the attackers and to determine the anti-Semitic nature of the attack.

The attack has been condemned by the National Bureau of Vigilance Against Anti-Semitism (BNVCA).

“Even if the sites for the Jewish community are under surveillance, Jews are still vulnerable targets in the streets and in shops,” the organization said in a statement to Le Parisien.

The attack comes amid a continuing and worrying rise in the number of anti-Semitic incidents in France.

Last year, 851 anti-Semitic acts were reported, compared with 423 the previous year, with acts of physical violence jumping to 241 from 105, according to France's Jewish umbrella organization CRIF.

"These anti-Semitic acts represent 51 percent of racist acts committed in France while Jews make up only one percent of the French population," said the group in January.
The Jewish population in France, the biggest in Europe, is thought to number between 500,000 and 600,000.
The CRIF group said there was a "very significant and very worrying increase in the violence of anti-Semitic acts" and warned that "anti-Semitic" prejudices were rife in the country.
The CRIF report was released just weeks after four Jewish men were shot dead at a kosher supermarket in Paris by jihadist gunman Amedy Coulibaly on January 9th, two days after brothers Cherif and Said Kouachi killed 12 people in an attack on the Charlie Hebdo offices.

Less than a month later, soldiers who were protecting a Jewish centre in Nice were attacked by a knife-wielding man and in February hundreds of Jewish graves were vandalized in a suspected anti-Semitic act that shocked the country.

On Sunday President Francois Hollande warned that the continued existence of racism and anti-Semitism meant "the worst could yet return", as he led commemorations at Struthof in the Alsace region, site of the only Nazi camp on French soil.