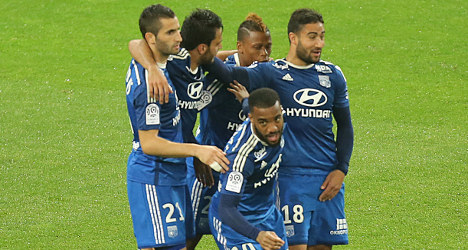 Lyon players celebrate a goal in their victory over Reims that puts them back on top of Ligue 1. Photo: AFP

Lyon refuse to let Paris Saint-Germain run away with the Ligue 1 title after a 4-2 win at Reims on Sunday put them back on top of the table.

Corentin Tolisso, leading scorer Alexandre Lacazette and Clinton Njie all scored in the first 20 minutes for OL, with Mickael Tacalfred scoring a late own-goal and Alexi Peuget and Gaetan Charbonnier replying for Reims.

It was the perfect return to his former stomping ground for Lyon coach Hubert Fournier, who left Reims last summer after doing a sterling job in five years with the famous old club from Champagne country.

"We won't give up. We are level with Paris. They had a very good game but we keep on working hard," explained Lacazette, who became Lyon's top scorer in a single season.

"We have quality players and we want to play well and score."

Lyon end the weekend where they started it, on top of the table on goal difference from PSG, who romped to a 6-1 win at home to Lille on Saturday with Ezequiel Lavezzi scoring a hat-trick.

PSG also have a game in hand to come at home to struggling Metz on Tuesday, but Lyon are not giving up the fight and are also now a step closer to fulfilling their objective of qualifying for the Champions League.

Lyon led 3-1 after a remarkable opening 20 minutes at a rain-soaked Stade Auguste-Delaune, with midfielder Tolisso heading in a second-minute opener from inside the six-yard box following a Clement Grenier corner.

Four minutes after that Lacazette made it two with a superb first-time finish from Njie's cross to score his 26th goal of the campaign.

Reims, who started the day just a point above the relegation zone, got one back when Peuget's shot took a huge deflection off Maxime Gonalons to wrong-foot Anthony Lopes in goal.

However, Lyon exposed the weakest defence in Ligue 1 again when Njie converted Henri Bedimo's cross from the left to finish off another sweeping move.

Antoine Devaux twice hit the woodwork for the hosts in the second half before Tacalfred diverted a Steed Malbranque pass into his own net in the last minute.

There was still time for Charbonnier to head in a second for Reims, but a handsome win for Lyon leaves them six points clear of Monaco in third.

Monaco win in race for third

Monaco had moved a step closer to a return to the Champions League earlier in the day with a comfortable 3-0 win away to a Lens side who are now all but relegated.

Yannick Carrasco, Anthony Martial, with his eighth of the season, and Bernardo Silva got the goals for the Principality club in Amiens.

Leonardo Jardim's side, who were eliminated from the Champions League at the quarter-final stage by Juventus last Wednesday, have been outstanding in Ligue 1 since December, losing just once and conceding a miserly five goals.

The win leaves them two points clear of fourth-placed Saint-Etienne and five ahead of Marseille in fifth in the race to secure third spot, which carries with it a place in the third qualifying round of the Champions League.

"Our objective for the season is the podium," said Jardim. "This victory was important for us to maintain our position."

Lens, who have won just once in 2015, remain rooted to the foot of the table and are now 12 points adrift of safety with only 12 points left to play for.

Saint-Etienne moved above Marseille into the top four as they extended their unbeaten run to nine league games with a 1-0 defeat of Montpellier at the Stade Geoffroy-Guichard.

Max-Alain Gradel scored the only goal of the game in the first half for his ninth in nine league appearances since helping the Ivory Coast win the Africa Cup of Nations in February.

Marseille's hopes of qualifying for Europe suffered a blow as they collapsed to a 5-3 defeat at home to Lorient on Friday, the loss their fourth in succession.