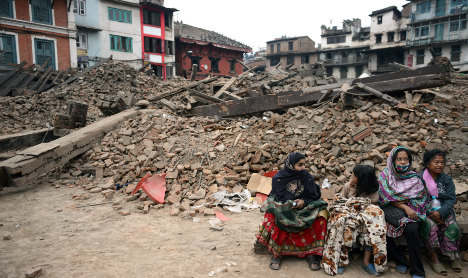 Survivors of the Nepal earthquake sit in the street in front of their destroyed homes. Photo: AFP

The ministry of foreign affairs in France is growing increasingly concerned as authorities try to trace some 674 French nationals who may have been caught up in the Nepal earthquake on Saturday.

The ministry set up an emergency number after the disaster stuck which has been inundated by over 10,000 calls from people searching for information about family members or friends who are believed to have been in Nepal.

Romain Nadal, a spokesman for France’s foreign ministry said: “We have estimated that the number of French nationals in Nepal, either those who live there, or those  passing through is estimated at around 2,000.”

In Nadal’s latest press briefing on Monday morning he said that 1,274 French nationals had been tracked down but they have not been able to contact 674.

It is unclear how many of  those may have been in the zone affected by the quake. Later on Monday Paris confirmed that two French nationals had died in the quake and at least 11 were injured.

Speaking on Sunday French foreign minister Laurent Fabius said a centre had been set up at the French embassy in Kathmandu, where people can register that they are safe and sound and extra resources and manpower have been sent from their embassy in India.

“We will continue to actively look for our compatriots, from whom we have had no news, said Fabius.

The foreign ministry said it was hoping to fly a plane out to Nepal on Monday that would bring back some of those French nationals caught up in the disaster.

Paris has also sent out a specialist emergency team or paramedics, firefighters and doctors to help the humanitarian efforts.

The latest death toll from the disaster stands at more than 3,200.