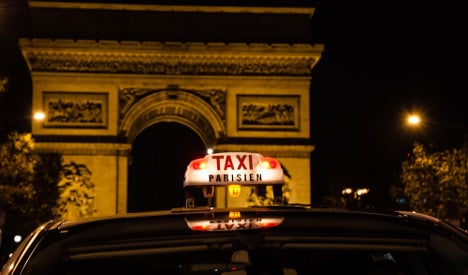 French media execs continue to give themselves a bad name over their apparently frivolous spending of tax payers money.

First it was the €100,000 office makeover for the head of French public radio, now it’s the mammoth €40,000 worth of taxi invoices built up by Agnès Saal, the head of France’s National Audiovisual Institute (INA), which was founded in 1975 to safeguard all TV and radio archives.

French newspaper Le Figaro reported at the weekend that Saal had built up the huge bill over just a ten-month period.

The sum is even more shocking given that Saal's position means she has access to her own chauffeur driven car as well.

The revelation was apparently sent to the Institute’s directors in an anonymous letter just in time for the organization’s annual board meeting last week.

Saal defended her actions at the weekend as well as offering to pay back part of the bill.

“As CEO of INA I have a company car with a driver made available to me, but because I cannot force him to work 12 to 15 hours a day and weekends, I also have a subscription to G7 taxis, because I don’t hold a driving license,” she said.

“This system already existed before I arrived and I continued with it,” she said.

However when it emerged her son had used her work reservation number and racked up €6,700 of taxi receipts, Saal admitted her wrongdoing.

“It’s a mistake. I accept the responsibility and I have already reimbursed those costs,” she said.

The question was also raised about the €7,800 worth of taxi fares that were charged at weekends, to which Saal said.

“It is not clear whether a taxi ride to an event in which I represent INA is professional or personal,” she said, before adding that only between a quarter and a third of weekend taxi fares were for business use.

The Huffington Post worked out that €40,000 over 10 months was equivalent to her (or her son) spending one hour 12 minutes in a taxi each day.

The story has drawn the ire of many in France.

The spokesman for France's Green party Julien Bayou said: "Anywhere else and the chief of INA would have resigned within two hours. There she will be remain a civil servant for life."

Comparisons have been drawn between Saal’s hefty bill for taxis and the €100,000 spent by Mathieu Gallet, the head of French public radio, on his office revamp.

The costly makeover was put down to Gallet’s choice of “precious rosewood panelling” and antique furniture.

The revelation angered staff as it came out during a prolonged strike over job cuts.

Last year France’s top trade union chief became bogged down in scandal when it emerged €1,400 had been spent on his new loo seat.

It was also reported that Thierry Lapaon spent €700 spent on a loo roll holder and towel rack.