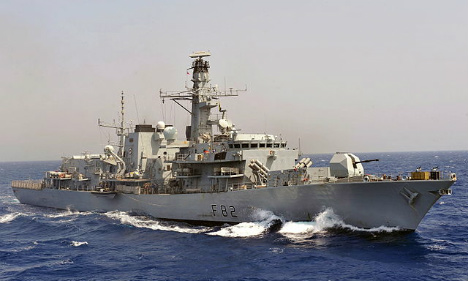 Nine men have been charged with drug trafficking after the British coastguard seized the massive stock of drugs more than two tonnes of cocaine off the east coast of Scotland, French and British officials said on Sunday.

French customs shared "specific information allowing two ships from the Royal Navy and the British coastguards to board a tug 100 kilometres (60 miles) east of Scotland carrying a very large quantity of cocaine, more than two tonnes" on Thursday, it said in a statement.

The drugs were found when the HMS Somerset and Border Force cutter Valiant intercepted the Hamal, a 35-metre tugboat registered in the Marshall Islands and owned by a Ukrainian company.

"This is a potentially significant seizure of illegal drugs," John McGowan, from the NCA's Border Policing Command, said in a statement.

"The exact amount of cocaine on board is yet to be determined and the search is likely to continue for some time."

French customs identified the ship after it left the Canary Islands for northern Europe in mid-April by an unusual route that skirted Britain.

The boat's suspicious itinerary meant officials feared that cocaine from South America had been loaded in the Canary Islands, French customs said.