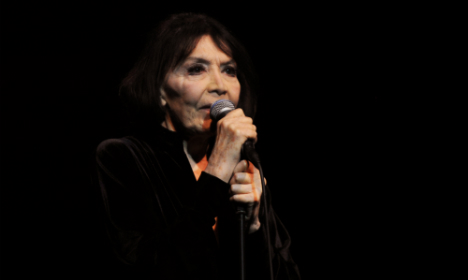 As she embarks on the last tour of a more than six decade career that began in post-war Paris, iconic French singer Juliette Greco had some parting advice for young performers: "Learn to say no."

The 88-year-old star of "la chanson francaise", famed for her performances of texts penned by the likes of philosopher Jean-Paul Sartre and poet Jacques Prevert, began her farewell tour Friday at the Printemps de Bourges music festival.

Clad, as always, in a black dress, with her eyes rimmed with kohl, Greco opened the festival in central France.

The effort left her so drained she cut short her performance by two tracks.

At a press conference Saturday she insisted however that she was "well", and just a little tired the previous day after touring an exhibition devoted to her at the Bourges festival that left her feeling "overwhelmed".

Asked what spurred her to continue performing, the octogenarian style icon, who was a stalwart of the Left Bank Parisian scene of the 1950s and 60s, cited a lifelong passion "for the audience, for poets, writers and musicians".

"It's a very good motivation, it spares you a lot of horrible stuff, like, for example, singing a song you don't want to sing just for the money," said Greco, who had a long-running affair with jazz musician Miles Davis and counted Sartre and feminist author Simone de Beauvoir among her friends.

Young people, Greco said, should "know how to say no."

"From there on everything falls into place."

In an interview earlier in the week with AFP, the singer whose hits included the 'Jolie mome' (cute kid) by Leo Ferre and 'La javanaise' by Gainsbourg, was emphatic that this would be her last tour.

"I'm renouncing the thing that is dearest to me, which is essential for me, but I want to go with dignity and as much elegance as possible," said the woman whose gamine good looks were immortalised by photographers such as Henri Cartier-Bresson and Robert Doisneau.

"I won't want to leave diminished," Greco stressed. "Plus, I'm a woman…men are forgiven for ageing, not women."

She will be accompanied by her third husband, pianist Gerard Jouannest, on her year-long tour which includes over 20 concerts in France and abroad.

Her next performance takes her to Tel Aviv on May 4th.

The pro-Palestinian movement for boycotts, divestment and sanctions against Israel (BDS) had urged the singer, whose mother and older sister were deported from Nazi-occupied France during World War II for their role in the Resistance, to cancel her Israeli fixture.

In making the appeal, the BDS campaign recalled Greco's own "acts of resistance", including singing anti militarist songs at a concert in Chile during the dictatorship of Augusto Pinochet.

Greco, who has always prided herself on her independence, said she was including Israel out of a "duty to remember".

Furthermore, she told AFP: "It's important to go to places with which you have profound differences of opinion.

"You have to go everywhere, it would be cowardice not to do it."