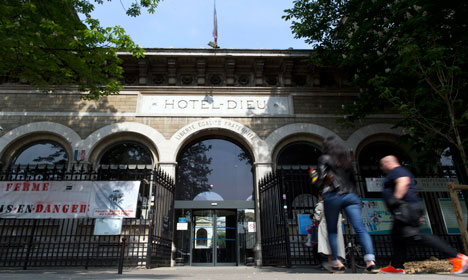 The suspect is still being treated in a hospital in Paris. Photo: AFP

Sid Ahmed Ghlam, 24, was taken into custody Sunday after he accidentally shot himself in the leg, a fluke occurrence that led to police uncovering an alleged plot to attack at least one church in the town of Villejuif, just south of Paris.

Ghlam, who remains in a Paris hospital recovering from the gunshot wound, was charged with "murder and attempted murder in connection with a terrorist enterprise" and criminal conspiracy, a source close to the case told AFP.

A magistrate placed him in custody on Friday night.

Police say they found an arsenal of weapons, tactical gear and cellphones in Ghlam's car and student flat, but one of the suspect's lawyers said Friday he denies "vigorously all the accusations against him."

Investigator say they uncovered detailed plans to attack churches and linked Ghlam's DNA to the murder of a 32-year-old mother in Villejuif, Aurélie Chatelain, who was found shot dead in the passenger seat of her car on Sunday.

The foiled church plot comes less than four months after the jihadist killing spree on Charlie Hebdo magazine and other targets around Paris that left 17 people dead.

Paris prosecutors have released a 25-year-old woman taken into custody Wednesday for questioning after investigators discovered encrypted electronic communications between her and Ghlam.

Investigators believe the suspect, who had previously drawn the attention of French intelligence agents over his postings on social networks expressing his desire to join jihadists fighting in Syria in 2014, was not acting alone.

"He appeared literally under the heel of" his commanders, who told him where and how to get his hands on the kalashnikovs, pistols and bulletproof vests found by police, said a police source.

"This type of individual does not act alone," said Prime Minister Manuel Valls.

He said over 1,500 French citizens have been implicated in "terror networks", 442 of whom were currently believed to be in Syria.

With the country a prime target of the Islamic State group, which has singled France out in several videos, fears are high that those who return radicalised may carry out attacks on home soil.