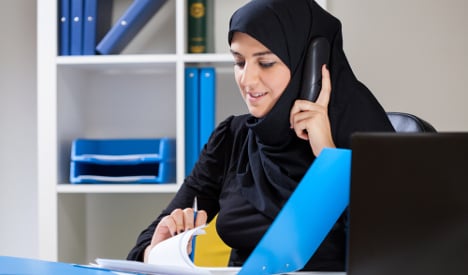 17 percent of religious conflicts in the workplace were about religious symbols. Woman wearing a headscarf at work: Shutterstock

According to the study, published earlier this week by the Observatory for Religion in the Workplace and the Randstad Institute, the number of religious conflicts in the workplace has doubled in the past year.

Of those questioned, six percent said that religion had caused conflict in the workplace, compared with three percent in 2014, Le Figaro reported.

Meanwhile, almost a quarter of managers (23 percent) said they were regularly confronted with religious issues in the workplace. This is almost double the figure from the previous year, at 12 percent.

Sources of religious conflict included the wearing of religious symbols (17 percent), demanding more flexible working hours (12 percent), requesting time off for religious holidays (19 percent) or refusing to work with a woman (in four percent of cases).

The natures of the conflicts themselves ranged from “accusations of racism and discrimination, the questioning of the legitimacy of the company or the manager to constrain religious practice and the refusal to talk," the report said.

According to the study the rise in religious conflicts is due to a change in employees’ attitudes.

“Employees are less hesitant about making requests to their superiors in line with their beliefs and religious practices,” the study said.

In 2010, the wearing of the full Muslim face veil, known as the niqab or buqa was banned in public places and back in 2004 a law was passed prohibiting the wearing or open display of religious symbols in all French schools.

The bans have been challenged in various courts over the years but have so far remained in place.

The issue of whether the ban should be extended to university students and indeed all work places regularly rears its head.

In November 2013 an appeal court in France upheld the decision by a Paris nursery school to sack an assistant who refused to take off her veil at work.

And in July last year the European Court of Human Rights ruled France's ban on the wearing of the full-face veil in public does not violate the human rights of Muslim women. Judges said the law was justified on the grounds of social cohesion.