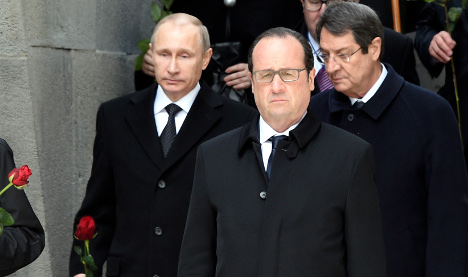 President Vladimir Putin on Friday called on French leader Francois Hollande to restore ties after a year of tensions over Ukraine as the two leaders met on the sidelines of genocide commemorations in Armenia.

"Unfortunately, our ties are not in the best shape, trade turnover is falling including with France which only causes regret," Putin told Hollande in the Armenian capital Yerevan.

"I believe that we have to look for ways to restore our ties and I believe that it's in everyone's interest," he said, signalling Kremlin's desire to break out of international isolation.

Hollande for his part called on Putin to "move forward" with implementing the Ukraine peace accords struck in February.

"The best way to overcome what has hindered us would be to move forward with the application of the Minsk agreement."

In February, Hollande and German Chancellor Angela Merkel travelled to Moscow to help broker a peace deal for war-torn Ukraine in a last-ditch effort to stop months of fighting between pro-Russian separatists and Kiev forces.

The conflict has killed more than 6,000 people in the past year and displaced a million, according to the United Nations.

Ukraine earlier Friday accused Russia of resisting a peaceful end to the conflict.

Putin and Hollande were also set to discuss the shelved deal for two French-built Mistral-class warships estimated at €1.2 billion ($1.5 billion).

The delivery of the first of two warships has been suspended for six months over Russia's role in the Ukraine conflict, straining ties between Paris and Moscow.