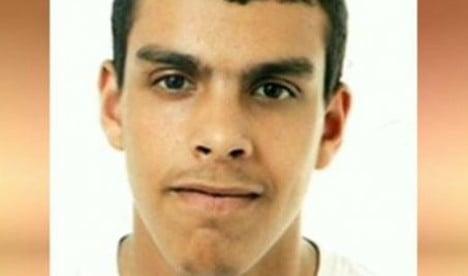 Sid Ahmed Ghlam, who is suspected of planning a Charlie Hebdo style attack on churches in Paris. Photo: Screengrab iTele

French police were on Friday trying to unravel the mystery around a thwarted church attack in which an Algerian jihadist sympathizer was "remote-controlled" by commanders likely in Syria.

Sid Ahmed Ghlam, 24, was being questioned for a fifth day after his custody was extended under special French anti-terror laws which allow police to interrogate a suspect for up to six days if there is a "risk of an imminent attack".

On Friday afternoon reports said that investigators had decided not to extend his custody any longer and will instead present Ghlam before specialist judges who will decide whether or not to charge him in relation to terrorist offences.

A 25-year-old woman that he was in contact with will also be released, according to the reports, after she too was arrested on Wednesday.

Ghlam, an Algerian IT student, was detained on Sunday when police made the fluke discovery of his plans to attack one or two churches in the town of Villejuif, just south of Paris.

He called paramedics saying he had accidentally shot himself in the leg and police later discovered an arsenal of weapons, tactical gear and cellphones in his car and student flat.

They also found detailed plans to attack the churches and linked his DNA to the murder of a young mother in Villejuif who was found shot dead in the passenger seat of her car on Sunday.

Security sources said the killing may have resulted from an attempt to steal the vehicle of 32-year-old Aurélie Chatelain.

A police source told AFP the suspect had an unusual profile and appeared to be "remote-controlled from afar by one or more mysterious men" likely in Syria who ordered him to target churches.

Interrogated from his hospital bed, Ghlam was not being very talkative, said police sources, adding he seemed torn between "wanting to talk (but) as if moved by some force obliging him not to say anything."

"He appeared literally under the heel of" his commanders who told him where and how to get his hands on the kalashnikovs, pistols and bulletproof vests found by police, said the police source. (The steeple of the Saint-Cyr and Sainte-Julitte church, in Villejuif, outside Paris. This church was probably a target of Sid Ahmed Ghlam. Photo: AFP)

Investigators have also seized "masses of electronic data" including encrypted messages between him and the 25-year-old woman in his circle.

She has denied investigators' accusations that Ghlam planned to seek refuge at her house after carrying out the attack.

"Everything was done to avoid being detected," said a source close to the investigation.

The foiled plot comes less than four months after the jihadist killing spree on Charlie Hebdo magazine and other targets around Paris that left 17 people dead.

With Paris still on high alert after the attacks, Interior Minister Bernard Cazeneuve has ordered authorities to step up security around churches.

Ghlam, a fresh-faced IT student with no criminal record, had previously drawn the attention of French intelligence agents over his postings on social networks expressing his desire to join jihadists fighting in Syria in 2014, and a trip to Turkey at the start of this year.

But a probe by intelligence services found there was not enough evidence for round-the-clock surveillance, according to Cazeneuve.

Prime Minister Manuel Valls said over 1,500 French citizens have been implicated in "terror networks", 442 of whom were currently believed to be in Syria.

With the country a prime target of the Islamic State group, which has singled France out in several videos, fears are high that those who return radicalized may carry out attacks on home soil.