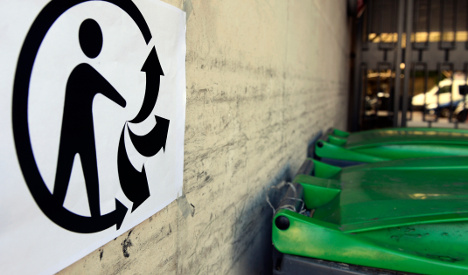 The "Triman" recycling logo next to trash containers in Paris. Photo: Alain Jocard/AFP

Despite a dramatic increase in the bill for household waste in France in recent years the country still only recycles 23 percent of all the waste from homes, according to a report by the French consumer watchdog.

This figure, taken from Eurostat data, falls below the European average of 28 percent and is less than half the figure for Germany (47 percent) and therefor was enough to spike the ire of the country's leading consumer watchdog UFC-Que Choisir.

France is also set to fall significantly short of the European objective that would see 50 percent of waste recycled by the year 2020 and 70 percent by 2030.

In its report, the watchdog slammed the situation as “disastrous both economically and environmentally”.

“This situation cannot get any worse, or rubbish will continue to increase, as well as the cost," Alain Bazot, President of UFC-Que Choisir told France Info.

“It’s an economic and ecological urgency.”

He added that it was vital to get consumers to take more responsibility when it comes to recycling waste but that “today the tools are notoriously insufficient”.

The association points the finger of blame at waste disposal companies, which it claims do not respect their objectives due to a lack of regulation and lax requirements.

The report also found that in many cases people simply weren’t properly informed about recycling.

Over half of those questioned in a survey conducted Eco-emballage and Opinionway (59 percent) confused the green dot symbol (which indicates that the manufacturer of the product contributes to the cost of recovery and recycling) with the recycling symbol.

The consumer body supports the use of the “Triman logo”, which is designed to inform consumers that products come with sorting instructions for recycling.

It also calls for the creation of an independent administrative authority tasked with overseeing waste disposal companies.