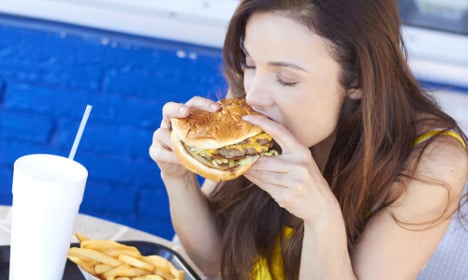 The French love their fast food but they would never admit it. Photo: Shutterstock

I am spending a week in my home country, which is nice.

And you should see the light in Provence! Priceless.

On the train to Paris, we were sitting next to a group of friends. They didn’t understand why everybody kept addressing them in English.

What was it that was giving away their nationality? They were baffled. They had hidden all British newspapers, and spoke good French.

I couldn’t help but be  amused. It was obvious that they were not French, if you ask me. Why? Well, basically there are certain things that we French wouldn’t do. (See below)

In fact, the group of friends was breaching at least three of these cardinal rules.

We French like our peace and quiet. This means that when we laugh, we try to do it discreetly. No laughing out loud – in a literal way, that is. And when we talk to each other, we try not to shout, especially in a public place. Obviously this doesn't apply in the comfort of our own homes. 2. We never wear shorts and flip-flops except at the beach. More specifically, we don’t wear shorts in a cocktail bar. Especially in a posh one. Or at a bar. Or at a restaurant. We just don't do it. 3. We wear shirts not T-shirts. Do you remember shirts, as in good, old-fashioned shirts? Then why not wear one from time to time? 4. We don’t put milk in our espresso. If you ask for milk with your espresso then you will get the look. And the cappuccino isn't so big in France. Some places simply don't do it. And if they do, you might not want to order it as it comes straight from a machine. We don't have the same 'barista' culture in France. 5. Trainers/running shoes are exactly that: shoes you put on when you train or run. Not on a train, or at a restaurant. 6. We try to suggest, not show. Too much flesh on display is, once again, looked down upon. I know, we are very judgemental. That’s just us. 7. Keep it clean and simple. We might have a reputation for being dirty, but we actually look down on dirty hair and hairstyles that are a tad too fancy (we French are in fact quite conservative). 8. Don’t flaunt your love of McDonald’s.

Junk food is looked down upon in France. Don’t get me wrong, McDonalds is hugely successful in my home country, but we just don’t like to admit that we like it. It’s a French thing. Don’t ask. Obviously, if you are eating a takeaway meal on a train everybody will know that you are not French. And if you are with your children, it might be even worse: you are going to get judged because you are giving bad food to your kids. You’ve been warned! And here's two more from the folk at The Local France which have given us away as being foreign, even before we have opened our mouths. If you have ever been left wondering why the waiter/person behind the desk/random member of the French public speaks to you in English before you have even said a word then, if it's none of the above, it's highly likely to be because you've caught the sun – or in my case, look like the sun just hit you in the face.

If you want to blend in, then get some decent sun block. Although you do want a bit of colour, because if you look too white, then you'll also stand out. If you got to far, tr the cream Biafine. It's worked miracles in the past. When meeting French people for the first time, try to tone down your enthusiasm. A discreet handshake for blokes, not too smiley and smooth kisses on each cheek for the women. Know exactly which side you're going to kiss first and don't hesitate.

Any bungled bises or loud smiley "Bonjouuuuuuuuurrrrrrrr!" and you'll have given the game away.