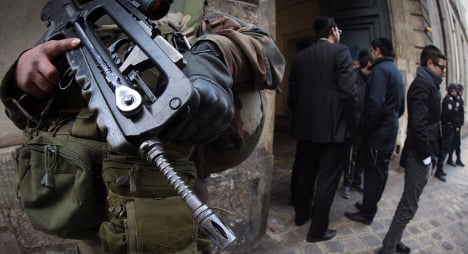 Soldiers guard a Jewish school in Paris. Will churches see the same kind of protection in the months to come? Photo: AFP
France's counter-terror security plan – known as Vigipirate – is already stretched to the limit. Since the January terror attacks in Paris that saw 17 killed, armed soldiers and police officers have been stationed outside Muslim and Jewish places of worship.
They've reported recently that the task has left them exhausted, but it seems that Wednesday's news about a foiled terror attack on a Christian church may mean an even greater burden for anti-terror police and soldiers.
It was revealed on Wednesday afternoon that a 24-year-old IT student who was arrested on Sunday, named in the French press as Sid Ahmed Ghlam, was allegedly set to embark on a terror attack on the Catholic church of Saint-Cyr Sainte-Julitte in Villejuif, an area just south of Paris.
French Prime Minister Manuel Valls reiterated government warnings that the country was facing an “unprecedented terrorist threat” and said on Thursday that 178 Catholic places of worship had already been placed “under specific protection”.
He said also said authorities were mulling how to protect other places of Christian worship.
“Protection of religious sites will be guaranteed, said Valls on Thursday. “Christians and Catholics in France were targeted. They must be able to go to mass in perfect peace.
On Wednesday Valls said that “to target a church is to target a symbol of France, the very essence of France.”
French bishops urged followers not to give in to fear.
“The terrorist threats, whatever they may be, seek to sow fear. Catholics will not give in,” they said in a joint statement.
On Thursday morning, the Archbishop of Paris Cardinal André Vingt-Trois met with the Interior Minister Bernard Cazeneuve to discuss his concerns.
But he seemed to accept that it was impossible to protect all of the 40,000 churches around the country.
“There are some sites that are more frequented than others and require more ongoing protection,” said the archbishop.
Police unions voiced their concerns on Thursday over the idea that churches must also be protected, saying the Plan Vigipirate had already pushed them to their limits.
“We are not robots, we need to rest,” said one police union leader. (The location of the church believed to have been a target. Photo: Googlemaps)
Jean-Charles Brisard, the chairman at the Paris-based Center for the Analysis of Terrorism, said that a church was likely picked as a target because of the low level of security.
“A church is what we call an easy target, or a soft target,” he told The Local.
“That's exactly what they want. And it represents a high level of symbolism that would attract a lot of media attention. We know several networks like Isis have done this repeatedly lately. The nature of the target in this case is of a high importance.”
READ ALSO: What we know about the terrorist and his victim (Photo: AFP/Screengrab Ouest France)
Going forward, Brisard expects changes to the levels of security at French churches.
“Obviously security will be tightened at churches and other Christian locations in France. It's an easy target, and other people could be inspired by this failed attempt to try and carry out their own.”
And this appears to be a very real possibility. Brisard said that there are somewhere between 3,000 and 5,000 people under surveillance in France who are considered to be dangerous – and that monitoring them all around the clock would be “impossible”.
He added that while it was still too early to draw any conclusions about the suspect, he matched the profile of other similar terrorists in Europe of late.
“It seems obvious he was radicalized and willing to travel to a combat zone. This is a profile we have seen in the past in Europe. These kinds of people present a clear danger to our country, and we have seen what they are capable of too many times in Europe in the past few months,” he concluded.
Meanwhile, local bishop Michel Santier said church goers have been left stunned ever since police arrived at the Villejuif church on Wednesday morning.
“It's stupefying to learn that Christians and Catholics could have been the targets of this, at least that's what's amazing to think for the Christians and Catholics of Val-de-Marne,” he told Le Parisien newspaper.
He added that he was unsure if the alleged attack was planned for a time when the church was empty or full, but that if it had been successful it “would have been an attack on France's heritage”. (The Villejuif church believed to have been the target of the attack. Photo: Googlemaps)
“At the same time there is a great relief that a potential attack was thwarted thanks to the work of the intelligence and police services,” he said.
He added that it was important that his community didn't bow down in the face of terrorism.
“If we let ourselves be overwhelmed by fear then the people planning these attacks are the winners,” he told the paper.
Local priest Philippe Louveau noted that as it was the holidays, the church wouldn't have been too full if there were an attack.
News of the foiled attack has been front page news in France all day on Wednesday, as the country is still feeling the after-effects of the attack in January, in which 17 people were killed by Islamic extremists.
READ ALSO: France foils terror attack on churches in Paris