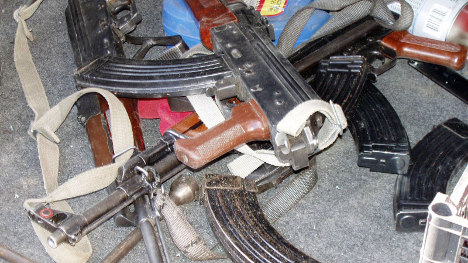 Kalashnikovs, the likes of which were found in the car of the student behind the Paris church terror plot. File Photo: AFP

Did the 24-year-old IT student Sid Ahmed Ghlam plan to attack churches in Paris alone or was he aided by others?

That's the question counter-terror police in France are desperately asking on Thursday, the day after Ghlam's terrifying plot to attack churches in the Villejuif suburb of Paris was revealed by the government.

The revelations about a planned attack that again escaped the radar of French intelligence services have highlighted the danger for France which is often singled out by jihadists as a prime target.

In the aftermath of the Paris terror attacks French criminologist and security and terrorism expert Alain Bauer told journalists there was no such thing as a "lone wolf" terrorist.

“The expression ‘lone wolves’ is a good way for intelligence services to explain how they failed,” Bauer said.

Counter-terrorism chiefs in France may have been looking at another failure to stop an attack if Ghlam had not accidentally shot himself in the leg on the morning, police believe he was due to strike.

Paris prosecutor Francois Molins said that Ghlam had told police "far-fetched" tales of how he had received the bullet wound to his leg, such as that he had shot himself while trying to throw his weapons into the Seine river.

Since then however he has exercised his right to silence.

Investigators are now focusing on who may have helped Ghlam and who supplied him with his arsenal of weapons.

At least one person close to him, believed to be his partner, remains in police custody for questioning.

Unconfirmed reports in the French press said he picked up the weapons, including several Kalashnikovs, from someone in the northern Paris suburb of Aulnay Sous-Bois.

The weapons were stashed in a Renault Mégane car, for which Ghlam was given directions and a set of keys. He then took the arms, bullet proof vests and pistols, back to his student lodgings in the 13th arrondissement in Paris.

Analysis of his communications equipment indicated Ghlam "was in touch with another person who could be in Syria on how to carry out an attack, with the latter clearly asking him to target a church," said Molins.

As well as the four Kalashnikovs, a handgun, ammunition, bulletproof vests, communications equipment and €2,0000 in cash found by police at Ghlam's apartment, prosecutor Molins said multiple papers in Arabic were found that made reference to Islamic State militant group and al-Qaeda.

It is unclear whether Ghlam was in contact with anyone specifically linked to these two terror groups.

"This type of individual does not act alone," said Prime Minister Manuel Valls.

Investigators will be desperately trying to track down the contact in Syria, fearing he/she may be handing out instructions to other jihadists based in France, who may be ready to strike.