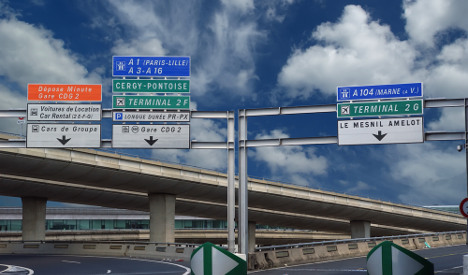 Getting to and from Charles de Gaulle airport from Paris has often been an ordeal for air travellers over the years, mainly due to either problems on the RER B line or traffic jams on the roads.

Only last week the train line was cut for hours due to a huge blaze at a textile depot.

From the morning of Wednesday April 29th travellers travelling to Paris from the airport will now have the speedier option of using a new express lane on the A1 motorway in the direction of Paris.

The lane, which is reserved for buses and taxis, will be closed to unauthorized vehicles during the morning rush hour, which is between 6:30am and 10am (except for weekends, holidays and school holidays).

Unauthorized drivers caught using the lane risk a fine of up to €135.

For the moment there are no plans to implement the same scheme for vehicles travelling from Paris in the direction of the airport, the Ministry of Transport told The Local, after tests in 2009 revealed it wouldn't be of much use.

May will also see the start of a new service from the budget airport shuttle company easyBus which will link Charles de Gaulle airport to Paris’s city centre.

Last year a new high speed rail link between the centre of Paris and Charles de Gaulle airport was finally given the green light.

Once complete in 2023, the CDG Express, as the link will be known, will speed travellers non-stop along the 32 kilometres (20 miles) between the capital's central Gare de l'Est railway station to the airport in just 20 minutes.

That is twice as fast as the existing suburban train that stops along the way, and which is often overcrowded and stalled by technical problems.

A one-way express ticket is projected to cost €24 ($33), compared with less than €10 for the suburban train.