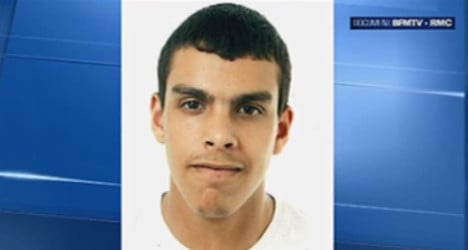 Sid Ahmed Ghlam, the suspect who is believed to have been planning a terror attack against Paris churches. Photo: screengrab/BFMTV

A 24-year-old computer sciences student named in the French press as Sid Ahmed Ghlam was arrested on Sunday in the 13th arrondissement of Paris, not far from his student residence.

He was held after apparently having shot himself in the leg by accident, just as he was preparing to carry out the attacks.

He had called an ambulance but police became suspicious after hearing his story and traced the blood back to his car.

According to French prosecutor the man refused to allow police to search the vehicle.

But when they eventually did, they found a loaded Kalashnikov, three spare magazines, a pistol, a GPS, a bullet proof vest and three mobile phones.

Further searches of his student lodgings in the 13th arrondissement unearthed several more automatic weapons, described as a "real arsenal of military weapons" according to French Interior Minister Bernard Cazeneuve.

Cazeneuve said evidence on his Facebook account suggested he was planning to target “one or two churches” in the Villejuif suburb to the south of Paris on that Sunday.

French prosecutor François Molins said on Wednesday that Al Qaeda and Isis documents were also found in his flat and that he was in contact with an individual in Syria who is believed to have instructed him to attack churches.

Ghlam was born in Algeria but came to France in 2009 to join up with other members of his family who were already in the country.

The suspect was a student from 2010 to 2012 at the IT college SUPINFO in Paris where an unnamed source told the French daily Le Figaro that he came across as a normal student.

“He never did anything to draw attention to himself, he was a normal student, with good grades. We were very surprised to see his name in the press today,” the source said.

He was described as a “radical Islamic” by French authorities but it is unclear when and where he became radicalised. Cazeneuve said that intelligence services were aware of the individual and had placed him under surveillance for several months in 2014 and 2015.

However according to reports the suspect did nothing to raise their suspicions or to prompt counter-terror police to open a case against him.

Whilst he is reported to have spent a week in Turkey, he is not believed to have followed the route of many jihadists by crossing into Syria.

No links were established between him and established networks that help jihadists reach Syria. However the DGSI did create a special file on the subject titled "S" meaning "state security", so if any authority checked his identity they would know he had been surveyed and the level of danger he was ranked at.

He came to their attention after expressing his desire to fight alongside jihadists in Syria. Some members of his family and his partner have also been taken into custody for questioning, including his sister who was reportedly recently radicalised.

He was also known to the police after being implicated in a violent attack two years ago.

He is currently in police custody being grilled by counter terrorist police.

Prosecutor Molins said that after initially making up "fantastical" stories about the weapons in his possession, the student has exercised his right to silence and has remained tight lipped.