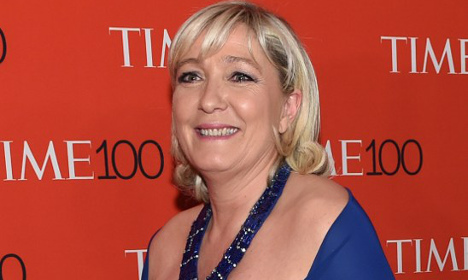 Le Pen donned a blue cocktail dress and black cape for the annual ceremony at The Lincoln Centre in New York on Tuesday night, where Time magazine crowned the most influential people of the year.

According to France's Europe1 website Le Pen spent a full five minutes posing for the cameras from the world's media. She was accompanied by he partner Louis Aliot, one her party's vice -residents.

The fact that Le Pen was even on the guest list was, in her words, testament to the growing influence of her brand of politics on both sides of the Atlantic.

"People are taking note of the political upheavals that are happening, a great political force that I represent tonight — and that tomorrow can perhaps change the face of decisions that are made not just in France, but perhaps in Europe," Le Pen said in an interview.

Among the other influential folk from around the world feted by Time were US president Barack Obama and TV Reality star Kim Kardashian.

"Perhaps in a few months there will be major changes in France," Marine Le Pen said as she arrived at a gala dinner.

Marine Le Pen has tried to clean up the party's racist image since taking the reins in 2011, with the FN enjoying a series of election successes, notably coming first in last year's European elections.

She has been involved in a bitter public spat with her controversial father, who recently repeated his claim that the Nazi gas chambers were merely a "detail of history".

Le Pen said she was delighted to be the only representative of the French political world at the Time event, where French economist Thomas Piketty was also honoured.

Time put Len Pen in the "leaders" of the world category alongside Obama, his Russian and Cuban counterparts Vladimir Putin and Raul Castro, Pope Francis, as well as Apple CEO Time Cook.

Le Pen said she was proud of her country and proud of millions of French voters who had stopped voting for the traditional right and left.

"You see the France of the forgotten. This evening they are not forgotten," she said.