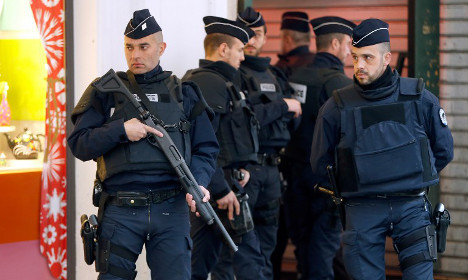 French anti-terror police believe they have foiled an 'imminent" terrorist attack against "one, maybe two churches" in Paris, the interior minister revealed on Wednesday.

Cazeneuve revealed announced that a 24-year-old computer science student, of French Algerian origins, was arrested on Sunday in possession of a significant arsenal of weapons. It is believed he was intending to carry out an attack that very day.

"On Sunday morning in the 13th arrondissement of Paris the police discovered an arsenal in his car and at his home composed of several military weapons," said Cazeneuve.

"Documents were also found that showed without doubt that the suspect was planning to carry out an imminent attack," Cazeneuve added.

"He was immediately taken into custody for questioning," he added.

According to reports in Le Monde newspaper it appears the attack, planned for the same day, was only thwarted by complete chance.

Folice became suspicious when the student, who is believed to have moved to France from Algeria in 2009, called an ambulance on Sunday morning in the 13th arrondissement of Paris with a gunshot wound to the leg. He claimed he had been the victim of an attempted robbery, but it is likely that it was a self-inflicted wound.

Police on the scene were alerted by his confused story and followed the traces of blood back to his car where they discovered a Kalashnikov type weapon as stolen police weapon and several police armbands.

Officers arrested him and then carried searches of his student accommodation which unearthed several more automatic weapons as well as bullet-proof vests. A map detailing the locations of all Paris police stations was also found, BFM TV reported.

It is believed he wanted to strike against churches in the suburb of Villejuif, to the south of the city.

The man was known to intelligence services after coming on their radar when making enquiries about leaving for Syria.

He was placed under surveillance in 2014 and 2015, although nothing untoward was discovered during that period.

The man is also suspected of the mysterious killing of a young female dance enthusiast in the Paris suburb of Villejuif. Traces of his DNA were found at the scene of the crime, the interior ministry said.

The 32-year-old mother had just come to the area from northern France to take a pilates training course and had written of how happy she was to be there on her Facebook page on Saturday evening.

Around nine hours later, her body was discovered by passers-by as smoke poured out of the car from an overheating laptop.

The car was parked in a turn in the road, on a hill, in front of another vehicle in a calm residential road.

Wrong place, wrong time? A crime of passion? A judicial source told AFP Sunday that investigators were open to all possibilities.

But Chatelain's father Jean-Luc, his voice broken with grief, had told AFP Monday that the mother of five-year-old Juliette had no enemies.

"The father of the little girl… and my daughter have been separated for several years but they got along fine," he said.

France has been on high alert since the Paris terror attacks of early January that left 17 people dead as well as the three gunmen Said and Cherif Kouachi, plus Amedy Coulibaly.

Cazeneuve repeated the words of top counter-terror officials in March that the level of terror threat facing France was "unprecedented".

"Our vigilance and determination are total," Cazeneuve said on Wednesday.

Before those attacks in Paris in January French anti-terror police revealed that in the preceding 18 months, French intelligence services have prevented as many as five terrorism plots from taking place on French soil.

The government has warned that the biggest threat posed comes from the hundreds of French jihadists returning from Syria.

France is currently investigating over one hundred criminal cases linked to suspected jihadists, the interior minister revealed in December.