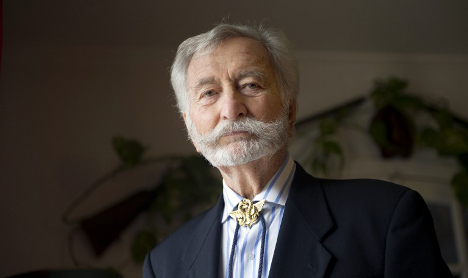 Robert "Bob" Maloubier died at the age of 92. Photo: AFP
"His final battle was against his illness and he fought to the end," widow Marie-Helene France told AFP, adding that Maloubier died late on Monday.
Maloubier was a key asset for the SOE, set up in 1940 by prime minister Churchill to carry out spying and sabotage missions behind German lines.
"Bob", as he was known by his British handlers, twice parachuted into occupied France, once the day after D-Day, and had a string of narrow escapes from capture by the Nazis.
One of his missions was designed to help convince the Germans that the D-Day landings would take place at Calais instead of Normandy.
"The war for me represented the best years of my life, because I survived," he told AFP last year.
Born on February 2, 1923 in a chic suburb outside Paris, Maloubier was recruited by the British while he was attempting to reach London via Algiers at the age of 19. (Maloubier shows a picture of the men in his unit during World War II. Photo: AFP)
After the war, a 22-year-old Maloubier joined the French secret service and helped establish the military's specialist diving unit in 1952.
Along with a colleague, he also helped design the world's first diving watch for Swiss makers Blancpain, the "Fifty Fathoms", which was later adopted as the official timepiece of the US Navy Seals.
Maloubier then spent a varied career in Africa, working as a forest ranger in Gabon, for oil company Shell in Nigeria, and helping train the presidential guard of Gabon's leader Leon M'ba.
Upon retirement — a word he hated — he took up writing, recounting his life in the SOE, with books like "The Secrets of D-Day".
His last book was published just a fortnight ago.
Maloubier was one of the last two surviving Frenchmen to have been awarded Britain's Distinguished Service Order, which he received personally from king George VI at the end of the war.
He was made a member of the Order of the British Empire when Queen Elizabeth II visited Paris last year for the 70th anniversary of the Normandy
landings.
He had met the future queen once before, when she was a teenager in wartime London.
"I will tell her that I remember her wearing her girl guide uniform in the ruins of London in 1943," Maloubier told AFP before the ceremony.