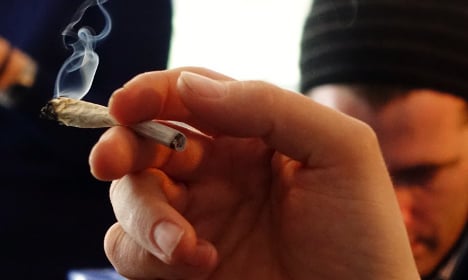 Cannabis use is on the rise among French adolescents. Photo: AFP

Fresh figures from the French Observatory for Drugs and Addiction (OFDT) show that soft drug and alcohol use are on the rise among the nation's teenagers – particularly the females.

At the age of 17, over 47 percent of the French have already tried smoking cannabis, 68.4 percent have smoked a cigarette, and 89.3 percent have experimented with alcohol.
The Observatory's statistics are based on interviews carried out last March with over 26,000 adolescents, and showed sometimes alarming increases compared to the last survey of its kind in 2011.
Twelve percent of those surveyed , for example, said they drank alcohol at least ten times a month, compared with 10.5 percent in 2011.
Smoking is on the rise among teenagers, the report noted, with 33 percent of boys aged 17 smoking daily – up from 32.7 percent in 2011. Girls aged 17 saw a larger increase, with 31.9 percent smoking daily compared to 30.2 percent in the same study three years earlier.
Cannabis showed the most striking increase, with experimentation shooting up from 41.5 percent in 2011 to 47.8 percent last year.
The director of the OFDT, Francois Beck, said the increase was difficult to interpret.
"From an evolutionary context, we can see that there has been a stronger supply of cannabis in Europe recent years," he said, adding that there was both more marijuana and hashish available.
He added that it was often seen as a "natural" product, which he reckoned could also explain people's willingness to consume it.
And it wasn't just experimentation. Some 25.5 percent of 17-year-olds said they had smoked cannabis in the last month (compared with 22.4 percent in the previous study), and 9.2 percent said they smoke at least ten times a month (6.5 percent in 2011).
Beck noted that the most dramatic increase was among young women, whose experimentation levels rose from 40.9 percent in 2000 to 45.8 percent in 2014. Meanwhile, the boys saw a drop from 50.1 percent in 2000 to 49.8 percent last year.
Among the entire population, four in ten adults say they've experimented with cannabis – and 1.4 million people are estimated to be regular users – around 2 percent of France's population.
Another study this month found that "binge drinking" is also becoming all the more common among young French people – especially women – with around 46 percent of those aged 18 to 25 having drank to excess at least once in the last year, compared to just 33 percent ten years ago.
Meanwhile, those in that age group who have done it three times in the last year has almost doubled from 15 to 29 percent.