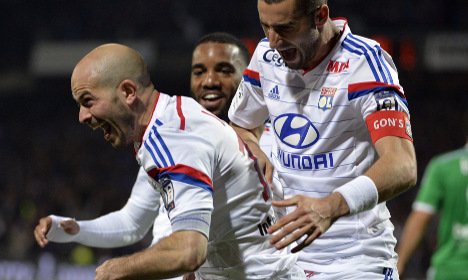 Ten-man Lyon came from behind to earn a savagely-contested 2-2 draw at home to bitter rivals Saint Etienne on Sunday and thereby climb back on top of Ligue 1.

A swashbuckling Lyon played for over an hour with ten men after the referee harshly awarded a 28th minute penalty and a straight red card to Lindsay Rose for a deliberate handball.

Lyon and Paris Saint-Germain both have 65 points with Lyon leading on goal-difference although Paris, who beat Nice 3-1 on Saturday, have played a game less.

Lyon coach Hubert Fournier hinted that the comeback stood his side in good stead for the fight with Paris: "It shows we have both the mental resources and the technical ability to come from behind and to believe in ourselves all the way."

The bitter derby between regional rivals was further enflamed ahead of the game by a terrace animator, a fan with a microphone, who said 'we need to crush these parasites.'

No Saint Etienne supporters were there to hear it, though, as they had declined Lyon's offer of 600 seats for away fans as a protest at the meagre allocation.

Lyon took the lead after a fiery start when Nabil Fekir fed Clinton Njie on 25 minutes, and his shot crept under Stephane Ruffier for a deserved lead.

Referee Said Ennjimi then sent off Lyon defender Rose after he handled in a goalmouth scramble. Forward Max-Alain Gradel sent Anthony Lopes the wrong way from the spot, and wearing Ivory Coast wristbands, danced away to the corner flag in celebration.

Worse was to come for the hosts as Romain Hamouma then rounded Lopes and deftly slotted home on the stroke of half-time.

But shortly after the break, Lyon's Christophe Jallet stole in at a corner to produce a powerful header on the six yard line and level the scores.

"I regret the fact the players couldn't or wouldn't dare go after the win after the equaliser," said Saint-Etienne coach Christophe Galtier.

Saint Etienne picked up five yellow cards and Lyon a further two as the game threatened to boil over, the referee doing a good job to keep control.

"This gives Paris the upper hand in the race for the title but we can count on the quality of our team and we can also hope that they slip up. We're still in with a good chance," Lyon president Michel Aulas said.

On Saturday, Paris Saint-Germain bounced back from their Champions League humbling against Barcelona by beating Nice 3-1 in their bid for a hat-trick of Ligue 1 titles.

Monaco are in third place after drawing 1-1 with Rennes on Saturday where a lapse of concentration cost them two points through a last minute goal for the visitors.

They refocus now on overturning a 1-0 first-leg deficit at home to Juventus in the second leg of their Champions League quarter final in midweek.

But crucially, they failed to fully exploit fourth-placed Marseille's continued slump as Marcelo Bielsa's side went down to a 1-0 defeat at Nantes on Friday night.

Saint Etienne's draw with the leaders leaves them in fifth, level with Marseille on points while Lille and Montpellier also climbed back into contention with Bordeaux for Europa League spots.

Lille beat Bordeaux 2-0 as Nolan Roux headed in his fifth goal of the season after an incisive run by Sofiane Boufal, who also provided the clincher for Adama Traore.

Montpellier can thank their 37-year-old Brazilian defender Vitorio Hilton, who followed up his goal, a powerful near-post header in the fourth minute, by sliding joyously and chest down through a huge puddle.