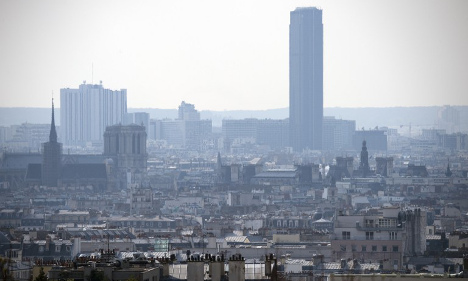 The Montparnasse Tower, right, and the Notre Dame cathedral in a thick smog. Photo: AFP
France's Minister of Ecology Ségolène Royal suggested on Sunday that the blame for the high pollution spikes that have hit the country in recent weeks, may lie abroad.
Royal said that she was planning to look further afield when it came to understanding why France's pollution levels had been so unbearably bad recently.
In Paris last month, officials launched emergency measures including free public transport and banning half of the cars on the roads as the city suffocated under thick smog.
Royal said that France would analyze neighbouring countries and their pollution levels, specifically mentioning troubling smog readings in northern city Lille and Strasbourg to the east. (A smoggy day at the Sacre-Coeur Basilica in the Montmartre district of Paris. Photo: AFP)
“We've seen that the pollution has come from the north and the east during the past peaks,” she told French television.
“I'm in the process of carrying out an analysis to find out the source and where exactly it's coming from.”
She added that France's bigger cities had to introduce “radical measures” with the aim of becoming eco-friendly within the next five years, including a full introduction of eco-friendly buses.
The minister also said that France had to be smarter during times of spikes in pollution.
She said that halving the number of the cars on the roads – a move that required 750 police officers to enforce each day in Paris last month – wasn't an ideal solution, adding that a better option could be to only allow eco-friendly vehicles. (A motorist in Paris gets fined for not obeying the restrictions last month. Photo: The Local)
It remains unclear exactly which countries the minister plans to analyze, but France has carried out tests on Germany in the past in an attempt to find a pollution solution.
In May last year, French experts wondered whether Germany's increased use of coal power stations could have been to blame for smog drifting west to France.
German officials denied the claims, saying their new stations were actually more environmentally friendly.