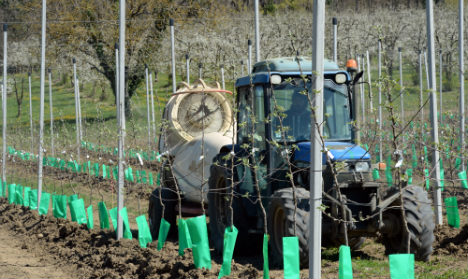 The rolling valleys in the Lot-et-Garonne region of southwest France are speckled with the white flowers of plum blossoms at this time of year.

They are all from the Ente plum variety — the only one approved by French authorities — with a history that dates back at least to the 13th century and has given the resulting prunes a legendary status.

During the peak harvest in late summer, the air fills with the scent of caramel and plum as the farmers dry out their fruits in large gas ovens, producing the distinctly rich flavour.

But pressure from global competitors has taken its toll.

"We were navel-gazing and thinking we were perfect," says farmer Patrick Leger, standing beside his picturesque orchard.

"In the 90s, the Chileans came here and took our savoir-faire, and then our markets by offering much lower prices. We were almost wiped out," says Leger, who has the physique of a rugby player, another speciality of the region.

Part of the problem was the small scale of production in the region.

"Compared to them, we are like gardeners," said Leger.

In just a few years, Chile has leapt to the number two spot in prune production — producing some 80,000 tonnes a year, just behind California which is on around 100,000.

Agen is falling far behind, with around 45,000 tonnes.

While Californian prunes end up mostly in American kitchens, the Chileans have targeted European buyers in Scandinavia, Spain and Germany — and even the traditional French backyard of Algeria.

The 1,400 prune farms in Agen — and the 10,000 employees who rely on them — faced mounting financial trouble in a region that was already struggling with low employment and few opportunities for the young.

In desperation, locals launched a plan in 2013 to overhaul and modernize the industry — including a dramatic increase in the area being cultivated.

"The goal was to professionalise the job of prune-growing, with a plan to renovate the orchards," says Jacques Pomies, president of the Bureau of Prune Professionals, which represents growers.

The plan is already bearing fruit, he says, with earnings three times higher than 2013.

Growers are also seeking to maximise space and efficiency, bunching trees much closer together.

Equipped with specialist sprinklers and anti-hail nets, the new methods are vastly more expensive than before — with investments of around €100,000 ($107,000) a hectare compared with €30,000 previously.

For now, the industry remains heavily dependent on EU subsidies  – amounting to 12 million euros a year until 2020 — although the farmers hope they can go it alone after that.

Part of the strategy is to target new markets, particularly China, which has become an avid consumer of French food and wine in recent years.

But it's Europe that remains the key market — consuming some 90,000 tonnes of prunes in  year.

"That's the one we have to conserve," said Pomies.

The massive investment is a huge gamble for the region and a test of whether French traditions can adapt to modern competition.

"It's like going from amateur racing to Formula One," admits Leger.