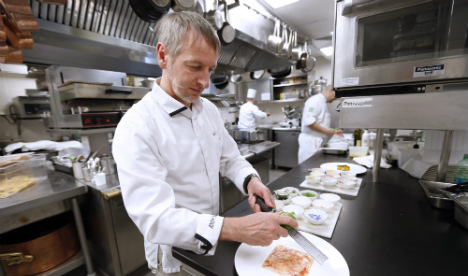 Paoli Sari. Photo: Valery Hache
That esteemed establishment is Elsa, a Riviera eatery run by an Italian chef, Paolo Sari. Sari boasts he takes the credo to such lengths that his 40-seat restaurant barely outside Monaco's border is "the only certified 100-percent bio establishment in the world".
Certainly he is inflexible in ensuring his Mediterranean cuisine, mixing French and Italian recipes, is entirely organic and sourced from local and near-local producers.
That means his asparagus comes from a village in Provence, his saffron from a mountaintop village near Nice, and seafood direct from fishermen. His almonds come from Sicily and go to make a diabolically delicious souffle.
Beef, though, is one ingredient that doesn't feature on his menu because there is no organic cattle farm nearby.
"Each ingredient, each supplier, even each transporter needs to have a certification," Sari told AFP.
Organization is key, with records provided on every menu and the percentage of dishes sold, "because an inspector could come to check at any moment".
"I let the ingredients be the star, after a fanatic search for good products," the chef said. He then adds his own "little touches". Three years of that approach earned Elsa — which is part of a resort called Monte-Carlo

"In the beginning, it was expensive. Scarcity makes for expense," said Daniele Gercelon, the director of Monte-Carlo Beach.

"Then we expanded the range of suppliers for greater reliability, choice and volume."

Now, she added, she is looking to implement the bio approach to the other eateries at the resort, which is part of a bigger, Monaco-based group managing several restaurants and hotels.

The winter closure of the Elsa restaurant between October and March means Sari only needs to find fresh seasonal produce in the warmer months, when it is at its most abundant.

He also has access to a three-hectare (7.5-acre) small, private farm in Roquebrune-Cap-Martin, the French village where the restaurant is located which butts up against Monaco. It also relies on another two-hectare plot of land in San Remo, a town just over the Italian border 20 kilometres away.

Sari, 45, said his experience working in restaurants in Japan, South Korea, China, Switzerland, London, New York, Los Angeles, Moscow and Venice gave him a broad range of influences, but he preferred an Asian "simplicity" in the presentation of his dishes.

Among his fare is an entree of green asparagus with generous slices of black truffle on a bed of potatoes. There is also a risotto made golden with saffron and a touch of bone marrow, and roast lamb ribs coated with acacia honey and accompanied by knob celery.

The wine, naturally, is all bio as well, with nearly 100 choices to match the meals.

Diners have a choice of desserts: a tarte tatin/creme brulee fusion, mini crepes Suzette with caramelised pears, or — France and Italy united — a Saint-Honore puff pastry cake married with tiramisu.