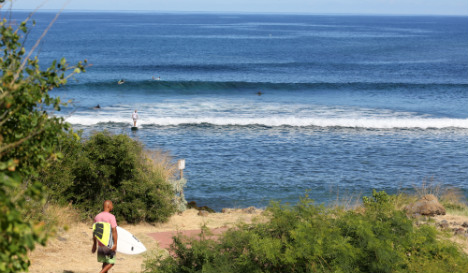 The 13-year-old Elio Canestri, one of the Indian Ocean island's most promising young surfers, was killed after he ignored an official ban and hit the waves with friends.

Canestri left a note for his mother saying "don't worry". But he was dragged off his surfboard by a 2.5 metre (eight feet) long bull shark and dragged out to sea.

The boy was the seventh fatal victim of shark attacks around Runion since 2011. Nine others have miraculously survived surfing or swimming near internationally known beaches such as St Leu and La Pointe au Sel.

On Wednesday, three days after the killing, Canestri's father Giovanni joined 1,000 others at a memorial for his son on the beach.

"I have two children left and I want them to stay alive and want all of you here to stay alive," he said as he pleaded with Réunion's youngsters to stay out of the sea.

Two hundred of the mourners went to the government office and tipped red paint on the road to protest against the lack of official action against the sharks.

"Words can't describe how sad and angry I am," commented Réunion's best known surfer Jeremy Flores on his instagram account.

Canestri was the second shark death this year. A 22-year-old woman was killed as she swam in the sea in February.

Most of Réunion's surfers have already decided not to take any more risks however.

The number of licensed surfers in Réunion has fallen from 1,600 when bodyboard champion Mathieu Schiller was killed in 2011, to 400 now.

Some have remained registered in Reunion but do not go into the sea there, said Christophe Mulquin, coach to the French youth and junior surfing teams.

Réunion has for years provided the core of French teams.

Hugo Savalli, France's surfing champion in 2012, said he stopped going into the sea off Réunion after the death of his friend Schiller.

"Last year I went into the water twice, but only up to two metres and I was like a little child," he said.

Janique Hoarau, a silver medalist in the European bodyboard championships, said she left Réunion in 2013 "with three suitcases and no work" because she was scared for her children who were in the same surf club as Elio Canestri.

The number of surf schools in Reunion has fallen from 14 to one.

Since 2013 when another leading local surfer Fabien Bujon had his hand and right foot torn off by a shark, the authorities have banned swimming and water sports outside of monitored areas.

Réunion now pays for its best surfers to go train far from the island.

"Last year, I only saw my son for four month," said Marc Bernard, whose 15-year-old son Lucas is another leading youth hope. The teenager spends most of his time between South Africa and France.

The Réunion authorities had planned to open up safe surfing zones with extra lifeguards, observer boats and cameras. But the death of Elio Canestri has halted such ideas.

Since the tragedy, no date has been spoken of and many surfers say it will be difficult to get back to the paradise surfing they enjoyed before 2011.