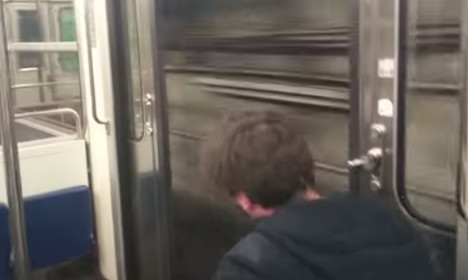 A Paris Metro hurtles through a tunnel with the doors open. Photo: Le Traineau/YouTube

The video posted on YouTube shows a Metro hurtling through a tunnel underneath the city with the doors wide open.

It shows the graffiti covered tunnel walls as well as the faces of passengers, who look as though nothing particularly is untoward.

The clip, uploaded by a user named Le Traineau, has been watched almost 150,000 times since it was posted a couple of weeks ago.

It was reportedly filmed between the station of Ségur and La Motte-Piquet on Line 10.

According to Le Parisien newspaper the trains used on Line 10 were first brought in back in 1967 and they are not fitted with modern alarm systems that prevent a train from departing if the doors are not fully closed.

Paris transport chiefs RATP say they received no report on the incident but have nevertheless launched an investigation after the video emerged.

However some web users have raised the question of whether the video could be a fake.

They point mainly to the fact the passengers don't look as though anything is amiss, apart from one woman who appears to move away at the start of the clip.

Watch for yourself and decide.

It's the first time strange happenings have been reported on the Paris Metro.

In November 2013 The Local reported how authorities were looking for a mystery man who took a stroll on the Paris Metro tracks.