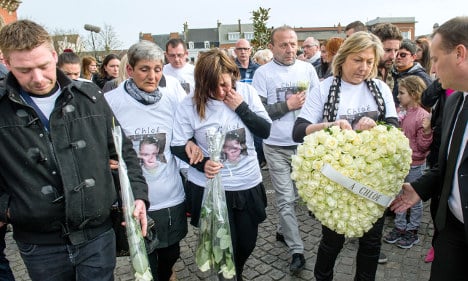 Chloe's mother, centre, is joined by other mourners in Calais on Thursday. Photo: AFP
The country was left reeling from the crime in the northern city of Calais, where flags flew at half mast, as grisly details emerged about how the girl, Chloe, was kidnapped, raped and strangled in the space of an hour and a half.
An estimated 5,000 people took part in a solemn march Thursday evening in Calais in her memory, according to local authorities.
The Pole, who has a long criminal history and served time in prison, confessed after being arrested on Wednesday night near the woods where the girl's naked, lifeless body was found.
Chloe was playing with a friend on Wednesday afternoon when she approached the man, who had stopped his car to drink a beer, and sprayed him with a water pistol, prosecutor Jean-Pierre Valensi said at a press conference on Thursday. (Mourners carry out a solemn walk in memory of Chloe. Photo: AFP)

Shoved Chloe in car
The suspect told investigators he grabbed the child and forced her into the red car, driving her to the nearby woods where he sexually assaulted and killed her.
Chloe's mother, who was present, burst into panicked screams as the man, described by witnesses as bald and wearing sunglasses, shoved her daughter into his car.
Police were alerted to the kidnapping at 3:30 pm and search teams were dispatched, one of which made the grisly discovery of the murdered child at 5pm.
Forensic investigators reported evidence of "strangulation and sexual violence", said Valensi.
Nearby, police found the red vehicle with Polish number plates, and the driver — heavily under the influence of alcohol — was arrested not far from the scene shortly thereafter.
The suspect "immediately admitted his involvement in the child's death," said Valensi. (Medics and police at the scene of the murder. Photo: AFP)
Threatened another girl in 2009
The man had served time in a French prison for robbery and extortion, and it emerged Thursday that he had already threatened another little girl in 2009.
David Selingue, a hairdresser in Calais, said his wife found the Pole in the room of his nine-year-old girl in June of that year, emerging from under a piece of furniture with a knife.
"He was pointing the blade towards her (his daughter) to threaten her," Selingue told AFP, adding he then escaped through a window.
"He is bad, a predator, he observes and then acts."
The suspect was handed over to Polish authorities in March last year after a Europe-wide arrest warrant was issued in his name.
Calais Mayor Natacha Bouchart said France's interior minister had assured her he would question Warsaw on the man's path since he was handed over.
Valensi said the man had arrived back in France on Wednesday morning and was planning to head to England where his sister lived.
French Prime Minister Manuel Valls called for light to be shed on the suspect's history, saying the family and community were "deeply shocked" by the murder.
"It is up to the legal system now to carry out the investigation and what we owe to the family is the whole truth," he said.
The city of Calais was plunged into mourning after the killing of the girl described as "cheerful and full of life".
Around 4,000 people took part in a solemn march in memory of Chloe later Thursday.
"It's horrific," a shocked mother of two told AFP outside Chloe's school on Thursday morning, where a counselling unit has been set up.
"My son knew her, he didn't sleep last night, he knows he will never see her again. I can't even imagine what the parents are going through," she said.
Url copied to clipboard!