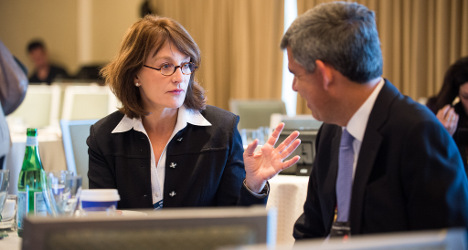 "Did you just say tu to me?" Photo: Shutterstock

McPartland: Let’s admit it, the whole tu and vous distinction causes so many problems, not just for foreigners but for the French themselves. Isn't it a little out of date for the Facebook/Twitter/Snapchat generation anyway? Isn't it time the French just choose one form of address? Think of all the time and stress it would save.

Founder of French Today, Camille Chevalier Karfis: Maybe it would be a good idea for us to change – it would make it easier for students of French for sure – but I doubt it’s going to happen anytime soon.

Even though “tu” would often be the default when talking on Facebook and Twitter, it’s far from being the case in all the situations in life.

“Paymill” – a German based Payment processing company has chosen to use “tu” in all their documentation and correspondence with their users, and every single time, I find it jarring, even offensive.

When speaking, yes, “tu” is more and more common, and it’s also the case for social media conversations, since they are dominated by younger people and casual language, mimicking the street style of speaking. But “vous” remains the predominant form in all written media – even Facebook uses “vous” for its written communication with its followers. (Always respect your boss with a vous. Photo: Shutterstock)

McPartland: One of my problems with tu and vous is that it often creates an imbalance, a kind of hierarchy of respect. For example I have to say vous to someone older than me or a boss – but they can say tu to me. France is meant to be the country of égalité, but it appears we are not all equal before the law of tu and vous.

Chevalier-Karfis: You're absolutely right. In theory, if someone says "tu" to you, you can say "tu" back to them. The big exception being age.

But "tu" versus "vous" can also be a strong tool for equality. Back in my early twenties, I was working as a secretary. My boss was in her thirties, and soon started hanging out with "the girls and all the women switched to "tu" with her. One day, I went to her office and said "tu" to her.

She replied: "Camille, I'd rather you use "vous". I later grabbed some guts, went back to her office and said "Francesca, since you'd rather have me use "vous", then, please use "vous" to talk to me as well". Her reply was: "Ah! That's how you're taking it!" Damn right… We had a revolution over this lady… It's not because you're my boss that you can "tu" me! And we said "vous" from that day on.

So you see, tu versus vous can be used when the difference of age is great, as a sign of respect. But not as a hierarchy. Well, not since the French Revolution that is. McPartland: I have heard so many tu and vous stories like this over the years from foreigners and French people. It just feels like it creates so many problems that to an English-speaker, at least, it seems unnecessary. Especially when it comes to working relationships. All that confusion, all that wasted energy. There are more important things to get on with in life. All those people who felt insulted or disrespected just because of one word. Surely respect is shown not by the choice of one word, I mean you could call someone "vous", but think really they are a plonker and in fact show no respect at all.

I am not saying lets just have one form of "tu" and "vous" to be like English, I just think one form would work to save the French people a lot of stress. Now I understand that “tu” wouldn't work, because many people couldn't cope with all that disrespect being shown and for to others “vous” is just far too formal and “stuffy” and a bygone age (until they get older perhaps). But can't we come up with a new version that people could start using?  And if not then can't we make the rules clearer. Always use “vous” at work and always use “tu” in the pub or maybe time limits, “vous” during working hours and tu after 6pm. Something, anything?

Chevalier-Karfis: Ha! it’s the first time I hear someone suggesting we invent yet another subject pronoun – yeah, another conjugation to memorize!

I prefer your suggestion about setting up clearer rules, but you know French people and rules… We do have many stories about “tu” and “vous”, but they are good stories – remember that French people usually love conflict and debate. Confrontation is not a problem in our culture.

I agree that having a clear set of rules will make things easier for foreigners, but I don’t think the use of “tu” or “vous” is a problem for French people. We choose among them without hesitation: "tu" and "vous" may be a question of age, formality, but it is also very much a question of social class and personal preference. It can convey a subtle yet strong message about who you are, and the relationship you are seeking, and I believe the French are attached to this subtlety. (The minefield of speaking French is never tougher than when it comes to the little things. Photo: Shutterstock)

McPartland: OK, I accept my campaign is unlikely to bring about any change. Although it's worth noting that further south in Italy and Spain the formal version of you is much less used these days and it doesn't seem to have done too much damage. Is there anything we can do to make it simpler? After offending in-laws, company bosses and shop keepers in one day I vowed to only use "vous" in future, for everyone, including my partner. Is there any harm in this? Can you recommend any other system to follow?

Chevalier-Karfis: As far as I know, there is no sign of "vous" formal weakening in France, so I'm afraid you're going to have to adapt.

The simple version would be:

– if you are a child, just say "vous" to any adult who is not your immediate family. Say "tu" to another kid.

– if you are an adult, saying "vous" to another adult is never offensive, and it is usually how you start things off. If the other adult says "tu", you can say "tu" back. Say "tu" to a kid.

– let's not forget that "vous" is the plural form (so the yous guys like they say in Boston) to both "tu" and "vous".

It's rather uncommon to say "vous" to your partner and immediate family, but it is not unheard of. It will make you look somewhat snobbish, that's all…

I am sorry to say that if you plan on living in France, you are going to have to really understand the subtleties about "tu" and "vous" if you want to fit in. There is just no way around it. Camille Chevalier Karfis is the founder of FrenchToday.com, and recently appointed expert to the French.about.com site.