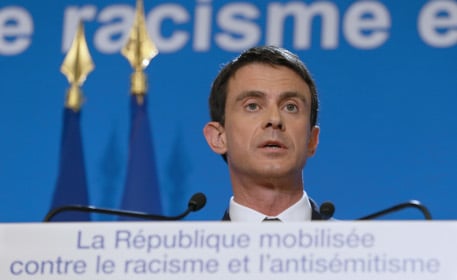 The French government will reveal on Friday how it plans to tackle racism in France.Photo: AFP

The French government revealed on Friday a list of 40 measures for how it plans to crackdown on racism and anti-Semitism.

The measures, that will set the government back around €100 million are centred on the areas of the internet, schools and on toughening the law itself.

"Racism, anti-Semitism, hatred of Muslims, of foreigners, homophobia are increasing in an intolerable manner," Manuel Valls said in the Paris suburb city of Creteil,  the scene of a brutal attack on a Jewish man and his girlfriend in December.

And in reference to those who fire off racist abuse on social media and other online platforms Valls said: "Passivity on the internet, it's over."

He said the plan provides for an establishment of "a national unit in the struggle against hate on the internet" and it will require require web hosting services to "have legal representation in France."

The move comes just over three months after the Paris terror attacks which prompted a spike in both Islamophobic and anti-Semitic acts.

On Thursday, the country's Islamophobia watchdog said anti-Muslim acts had lept six-fold in the first three months of the year compared with the same period in 2014.

It also comes just two months after a damning report from the human rights watchdog The Council of Europe which concluded that the French public are becoming more racist and more intolerant towards minorities.

Essentially the government wants to stiffen the punishment on those found guilty of hate speech.

In the past, these cases were dealt with under France’s more lenient press laws, but now they will be dealt with through the stricter penal code, which will mean justice will be meted out quicker and the penalties will be tougher.

Also any act that had an aggravating factor of anti-Semitism will also prompt tougher sanctions.

Much of the Islamophobic and anti-Semitic abuse is dished out online and the government wants to crackdown on those who “circulate racist words” on the web.

Their main weapon will be to block certain sites, as is already the case for those sites that glorify terrorism.

The main emphasis of the government’s drive to stamp out racism will focus on young people, hence the presence alongside Valls on Friday of the Minister of Education Najat-Vallaud Belkacem.

In schools, teacher training will be reinforced, head masters will be encouraged to report incidents, and students will visit various relevant memorial sites during their school years.

Group action law suits will also be allowed "to better fight against any discrimination."

Another aspect of the plan will be to offer a financial boost to charities involved in fighting racism.

“We need to show them that they are not alone,” said the Prime Minister’s office this week.

The €100 million ($108 million), will be used over three years to finance a large-scale communications campaign and various local-level initiatives.