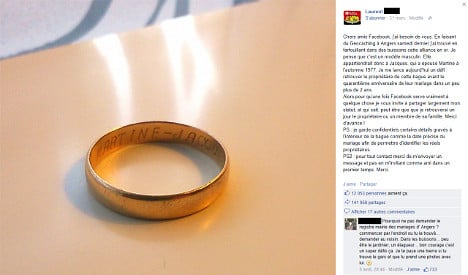 Jacques and Martine have been married for almost 40 years. Photo: Facebook screenshot

Jacques lost the ring one day in January while out looking for a hidden “cache”. As a geocaching enthusiast he often spends his afternoons seeking out hidden containers using GPS receivers.

But this time his slightly oversized wedding ring slipped off his finger as he rummaged in bushes near Angers, local newspaper Ouest France reports.

A few months later, at the end of March, Laurent found himself knee-deep in the same shrubbery. There he happened upon the ring, engraved with the first names of the two young lovers and the date of their marital union.

Laurent quickly set himself the task of reuniting the ring with its bearer before the couple’s 40th wedding anniversary.  But once he harnessed the power of Facebook he didn’t have to wait that long at all.

His post hunting for the owner of the ring got shared 140,000 times in less than a week. Jacques’ daughter saw the appeal, alerted her father, and at the weekend he made his way to Laurent’s house for the handover.

The geocachers had found each other.