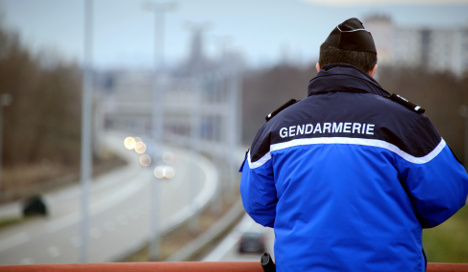 The theft was carried out on a stretch of the highway popular with thieves. Photo: AFP
A Taiwanese art collector was travelling in a taxi Wednesday afternoon through a long tunnel notorious for robbery attacks on tourists stuck in traffic, when the thieves smashed the car window and snatched her handbag.
It was unclear whether the perpetrators were just petty crooks who hit the jackpot or knew in advance that the woman's handbag was filled with valuable jewellery, such as a ring worth 1.7 million euros ($1.8 million).
Police are not ruling out any options as they probe the theft of the gems which the woman said were to be presented at the Paris Museum of Modern Art, said a source close to the investigation.
But the museum later denied they were to be given the jewels.
The unique and numbered items will be very difficult to peddle without a specialised network, police said.
"Either it was an order or they are in the shit," a source with a specialised police unit said ironically.
The 1.3km (0.8 mile) long Landy tunnel is taken by most people arriving at the Charles De Gaulle airport and heading into Paris and is the ideal spot for smash-and-grabs.
"It is often local delinquency. They aren't afraid of anything, know the area and escape through emergency exits," said the source.
A driver distracted and talking on his cellphone, a handbag left on a passenger seat, or luxury cars carrying tourists with possibly wads of cash on them are all easy targets.
In February 2010, Christina Chernovetska, the daughter of the then mayor of Kiev, was the victim of a similar robbery when a bag she said contained jewels worth 4.5 million euros was stolen from her.
Saudi prince Abdul Aziz Bin Fahd, the multi-millionaire son of the late King Fahd, fell victim to a spectacular armed raid on his convoy in Paris last August in which 250,000 euros and diplomatic papers were stolen.
Url copied to clipboard!