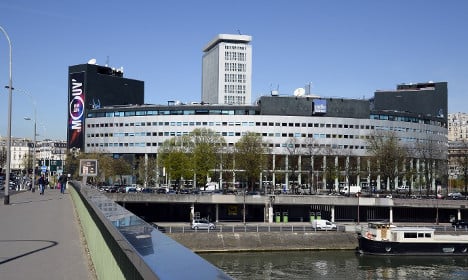 The headquarters of Radio-France, French public service radio broadcaster. Photo: AFP
The 28-day stoppage at Radio France was called off late Wednesday. Unions had maintained the strike to protest management plans to cut 300 jobs and shift some radio shows to the web.
"I welcome the end of the conflict," Culture Minister Fleur Pellerin told AFP.
She said the mediator she had appointed last week would now start a second phase of work of analysing the points of view of the group's 4,400-strong workforce and the management.
The strike had pitted Radio France unions against its young chief executive, Mathieu Gallet, who was named to the post a year ago.
The outside mediation and Pellerin's direct involvement marked a defeat for Gallet, a telegenic 38-year-old who used to be an aide in the previous rightwing government of former president Nicolas Sarkozy.
READ ALSO: So why are the French always on strike? But the unions have so far also failed to roll back his cost-cutting plan.
The union alliance at Radio France "will regroup and tend to its wounds," the representative of the hardline CGT union, Jean Matthieu Zahnd, said. The CGT had found itself largely abandoned by the other unions after the mediator had stepped in.
Gallet had vowed to lawmakers that he would push on with his plan to axe jobs to fill a 21-million-euro shortfall in Radio France's budget.
The group receives 664 million euros a year, 90 percent of it from a tax imposed on French households with a television.
However the flamboyant chief executive did himself no favours in the labour conflict by reportedly renovating his office with a view of the Eiffel Tower to the tune of 100,000 euros ($110,000) and hiring a PR consultant on a 90,000-euro salary as he was preparing his cost-cutting plan.