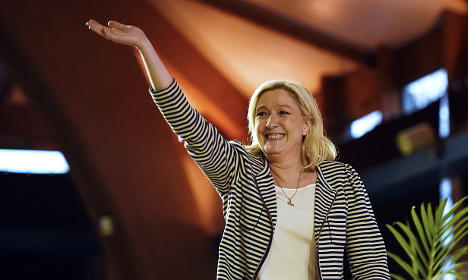 The US publication on Thursday put Le Pen on its annual list of the world's most influential people for the second time, the first coming in 2011, after a breakthrough year that saw her party secure 25 percent of the vote in elections to the European Parliament.

Her local and European successes "made her Europe’s leading right-winger, giving like-minded politicians across the continent a dose of electability", Time said.

The 46-year-old daughter of the party’s founder, Jean-Marie Le Pen, has said she wants to explode the European Union from within. She also wishes to restrict immigration but has sought to distance herself from the party’s more extreme old guard.

Indeed, in a family feud that gripped France this month, she took on her father and won, forcing him into a climbdown after he said he would run for regional elections. Le Pen senior, who infamously called the Nazi gas chambers a detail of history, now faces disciplinary proceedings for his unauthorized election bid.

"Le Pen has strong allure for many French, who have hit the wall with asphyxiating political elitism and near zero growth," said Time.

"To stop her race for the Élysée Palace in its tracks, France’s lackluster leaders will need to overhaul their ineffectual, gutless style and mount a more appealing revolution of their own."

Before that, the regional elections later this year will show how far Marine Le Pen has come in embedding the National Front in the fabric of French life.

“It’s vital for Le Pen that her party has elected representatives. It gives the party much more credibility and visibility,” Nonna Mayer, a political scientist and far-right specialist from Sciences Po, told The Local last month.

“She knows if you want to succeed in politics, it’s not only about the leadership, but you need a party behind it. That means the presence of the National Front in all layers of democracy in France,” she added.