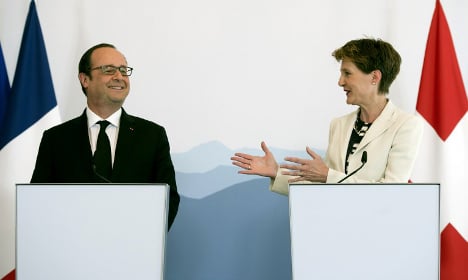 French president Francois Hollande (L) looks on as his his Swiss counterpart Simonetta Sommaruga. Photo: AFP
The two-day trip is the first state visit to Switzerland by a French president since Jacques Chirac's stopover 17 years ago.
Paris is aiming to smooth over a series of squabbles with its wealthy neighbour centred mainly on tax issues, but is also looking to the enterprising Swiss for inspiration on education and green economic growth.
The tax evasion issue has long weighed on relations, as France has become increasingly impatient with French nationals taking advantage of Swiss banking secrecy laws to stash cash out of sight of tax authorities back home.
Under pressure from France, the United States and other nations, Switzerland has been reforming its banking laws to make it easier to crack down on tax cheats.
Hollande hailed "the determination of Swiss authorities" to push forward with the reforms to make the system more transparent.
"In fiscal matters, information sharing on demand has been simplified and the requests from French tax authorities are generally treated," Hollande said.
"This issue is behind us."
– 'Relations require care' –
French presidents rarely pay a call to their Swiss counterparts: before Chirac's visit in 1998, Francois Mitterrand came in 1983 and Armand Fallieres stopped by… in 1910.
Ahead of Hollande's visit, Swiss Foreign Minister Didier Burkhalter hinted that the Swiss would appreciate more regular visits.
"Relations between neighbours require care. It is normal to have problems with your neighbours, but you have to talk about them, openly and often," he told public broadcaster RTS.
France and Switzerland share a 570-kilometre (350-mile) border.
Hollande held a press conference with Swiss President Simonetta Sommaruga in which both touched on a controversial Swiss vote from February last year seeking to dramatically rein in immigration from the EU.
"We had frank discussions," Sommaruga said, while Hollande underscored that there were "contradictions" in Switzerland wanting quotas as he said it was a country that had for many years backed the "free movement" of people.
During his visit, he will meet with some of the 167,000 French nationals who live in Switzerland, and will also discuss the situation of the some 150,000 residents of France who commute across the border each day to work.
Many have seen their jobs threatened by the sudden surge in the value of the Swiss franc, which has hurt Swiss export businesses particularly.
Cross-border workers were also alarmed by a popular vote last year calling for Switzerland to strictly control immigration of EU citizens.
Hollande is expected to remind Bern of its longstanding agreement to give EU country nationals free access to its labour market.
On Thursday, he and Sommaruga are set to travel to Switzerland's financial capital Zurich before taking a special train to Lausanne.
They will conduct a series of visits focused among other things on Swiss innovation in the area of environmentally sustainable economic growth and clean technology, the French presidency said.
After concluding the official part of his visit, Hollande will on Thursday meet Thomas Bach, head of the International Olympic Committee, in Lausanne.
Paris city lawmakers voted this week by an overwhelming majority to back a bid for the 2024 Summer Olympics.