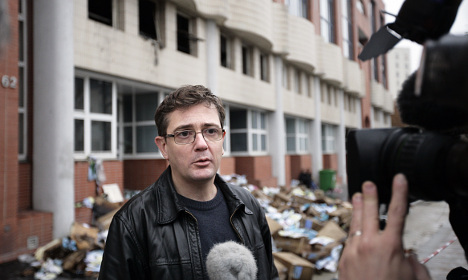 Charb answers questions in front of the offices of Charlie Hebdo after they were destroyed by a petrol bomb attack in November 2011. Photo: AFP

In the essay to be published Thursday which at times feels chillingly prescient, Charb worries that the fight against racism is being replaced by a struggle against "Islamophobia", which he argues defends Islam more than it does Muslims as citizens who are targeted because of their religion.

He also defends Charlie Hebdo, whose controversial cartoons often landed it in hot water, particularly when it came to caricatures of Prophet Muhammad that saw Charb and colleagues get death threats and eventually led to them being killed.

Brothers Cherif and Said Kouachi burst into an editorial meeting at the Charlie Hebdo offices in Paris on January 7th, peppering magazine director Charb and nine other cartoonists with bullets before calmly leaving.

They also shot dead a maintenance worker and a policeman who tried to stop them.

Published as a short book called "Letter to the Islamophobia swindlers who play into the hands of racists", the essay was wrapped up and ready to go two days before the attack.

Charb asks why Islamophobia, which technically means "fear of Islam", is being used by activists, media and politicians to denounce hatred of Muslims and wonders why "Muslimophobia" is not used instead, or simply "racism."

He argues that "a lot of those who campaign against Islamophobia don't actually do it to defend Muslims as individuals, but to defend Prophet Muhammad's religion."

Charb also takes a pop at religion, and particularly at believers.

He blames the media for helping popularize the term "Islamophobia" because "any scandal that contains the word 'Islam' in its title sells."

"A terrorist is scary, but if you add that he's an Islamist, everyone wets themselves."

And he also takes a dig at politicians whom he accuses of seeing Muslims where they should see regular citizens, and wanting to pander to a "Muslim electorate."

"That's saying that the majority of Muslims don't decide their vote according to the candidates' political ideas but according to the degree of sympathy they display towards Muslims," he argues.

Charb also defends Charlie Hebdo's controversial depictions of the prophet and extremism over the years, which earned it accusations of Islamophobia.

Chillingly, he refers to Al-Qaeda in the Arabian Peninsula's "Inspire" magazine which in 2013 published a list of 11 people accused of "crimes against Islam" and wanted "dead or alive."

"I find my name, badly spelled but accompanied by a photo where you can recognize my alarmed face" — a picture he said was taken when the offices of the magazine were burnt down in 2011 shortly after a special edition was published under the title "Charia Hebdo."

"The skillful montage is titled 'YES WE CAN' and below you can read: 'a bullet a day keeps the infidel away'."