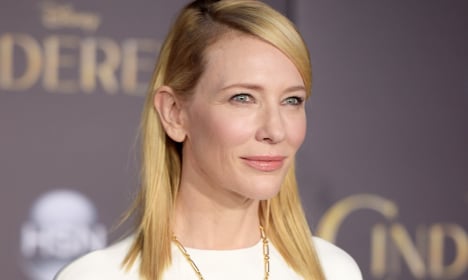 Australian actress Cate Blanchett. Photo: AFP
The selection for the official sections — including those vying for Cannes's Palme d'Or top prize — heralded a wide range: from intimate, auteur movies right up to action-driven spectaculars.
The list is "beautiful, it's new, it poses questions, it takes risks, and it says much about the state of global creativity," festival director Thierry Fremaux said.
South Korea leads a strong Asian contingent that also includes China, a Taiwanese martial arts pic, a Japanese drama and a film from India that shows it's not all Bollywood camp.
America is present with "Carol", a lesbian drama starring Cate Blanchett, and "The Sea of Trees" with Matthew McConaughey, both in the race for the Palme d'Or.
Woody Allen's latest, "Irrational Man", along with Pixar animation "Inside Out" and an American retelling of the French classic "The Little Prince", and also US-Israeli actress Natalie Portman's directorial debut, "A Tale of Love and Darkness", are all scheduled for out-of-competition screenings.
– 'Mad Max: Fury Road' –
Europe is strongly represented by France — Cannes always reserves a handful of slots for national contenders — and, this year, by Italy. Britain was noticeably absent, drawing grumbles in the news conference from at least one British journalist.
Epic big-screen stunts at Cannes will be guaranteed with the previously announced worldwide premiere of "Mad Max: Fury Road", Australia's latest
addition to the sci-fi franchise that made Mel Gibson famous. This time, the title role goes to hunky British actor Tom Hardy, with Charlize Theron co-starring.
"Sicario", a Canadian-directed movie starring Emily Blunt, Josh Brolin and Benicio Del Toro in a tale about a CIA operation to bring down a Mexican cartel boss, will add more star-power.
The festival's opening-night movie, however, will be uncharacteristically low-key with "Standing Tall", a French drama about a juvenile delinquent starring Catherine Deneuve as a children's court judge.
Plenty of other stars are expected in Cannes over the 11-day festival, though, to attend screenings of their movies or to promote upcoming flicks.
Hardy, Theron, Michael Fassbender, Benicio Del Toro, Marion Cotillard, Colin Farrell, Rachel Weisz, Jesse Eisenberg, Harvey Keitel, Josh Brolin,
Emily Blunt, Gabriel Byrne and Naomi Watts are likely to show.
– Australia goes A-list –
Australia's presence will be especially felt at Cannes this year.
"Mad Max: Fury Road", which is being released in most of the world by Warner Brothers, essentially plays the festival's Hollywood card as director George Miller piles on the special effects.
"Macbeth", a film version of Shakespeare's tragedy by Australian director Justin Kurzel is also standing in for Britain in the Cannes line-up, Fremaux said, pointing to its "Anglo-Saxon" heritage, London-based (but German-born) star Fassbender, and the fact it was mostly filmed in Britain.
And then there's Blanchett, a double Oscar winner, in "Carol", and Naomi Watts in "The Sea of Trees", supporting McConaughey as a suicidal American who befriends a Japanese man lost in a forest.
Australia — present and future — will also feature in a Chinese movie, "Mountains May Depart", which is about two lovers who separate and the son of one leaving for exile in the suburnt southern continent.
– Cohen brothers –
The jury deciding the Palme d'Or is headed by the Cohen brothers, Joel and Ethan, who themselves won the prize in 1991 with "Barton Fink".
Isabelle Rossellini will preside over the jury looking at the movies in the Un Certain Regard category, which encompasses work by little-known filmmakers.
The Italian-US actress will also lead homage to her mother, screen legend Ingrid Bergman, who is the face on the posters for this year's festival.