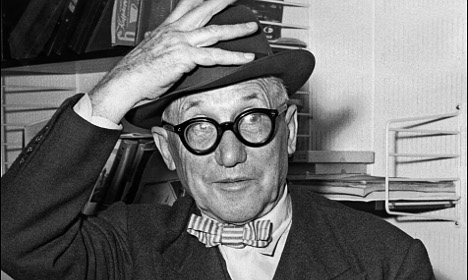 The disclosures made in two new books about Le Corbusier confirmed previous, less-categoric assertions and threaten to mar his legacy in a year in which France commemorates the 50th anniversary of his death.

Admirers of the architect, who pioneered the construction of utilitarian concrete buildings including a housing project in Marseille called La Cité Radieuse, have expressed shock.

Paris's Pompidou Centre, which is to open a three-month long exhibition dedicated to Le Corbusier on April 29th, has come in for allegations of whitewashing his image by omitting references to the controversy.

"I discovered he was simply an out-and-out fascist."

The architect "was active during 20 years in groups with a very clear ideology" but that "has been kept hidden", confirmed another author, Francois Chaslin, who published "Un Corbusier".

Born in Switzerland in 1887 as Charles-Edouard Jeanneret-Gris, the architect moved to Paris at 20 and in 1920 adopted his nickname Le Corbusier from an ancestor. Ten years later he took French citizenship.

He is known as one of the main pioneers of the modern movement in architecture, along with the German-American Ludwig Mies van der Rohe and Finland's Alvar Aalto.

His designs calling for functional apartment blocks with parks informed France's postwar urban planning policy for three decades. That policy ended in 1973 after it became clear that many such zones were depressing and anonymous, and contributed to urban alienation.

The new books show Le Corbusier moved in fascist circles in Paris in the 1920s.

He developed close ties with Pierre Winter, a doctor who headed France's Revolutionary Fascist Party, and worked with him to create the urban planning journal "Plans". When that publication ended, they started another called "Prelude".

Jarcy said that in "Plans" Le Corbusier wrote in support of Nazi anti-Semitism and in "Prelude" co-wrote "hateful editorials".

In August 1940 during World War II, the architect wrote to his mother that "money, Jews (partly responsible), Freemasonry, all will feel just law". In October that year, he added: "Hitler can crown his life with a great work: the planned lay-out of Europe."

Chaslin said research also uncovered "anti-Semite sketches" attributed to Le Corbusier, and showed that the French architect had spent 18 months in Vichy, where the Nazis ran a French puppet government, where he kept an office.

France's Le Corbusier Foundation, which works to maintain the architect's memory and works, elides many of those facts. A biography notes only that in 1930 Le Corbusier "contributes to the magazine Plans" and in 1933 was a "member of the review 'Preludes'". His Vichy role was described as an "extended stay" in the town.

One of the foundation's experts, Jean-Louis Cohen, said he was "shocked by this controversy".

The organizers of the Pompidou Centre exhibition on Le Corbusier, titled "The Measures of Man", defended their own omission of the fascism revelations by saying the display "doesn't address the entire work" of the architect. They also said Le Corbusier's work for the Vichy regime was handled in a previous exhibition back in 1987.

Serge Klarsfeld, a French lawyer famous as a Nazi-hunter and for lobbying on behalf of families of Jews deported from France during the war, said those arguments were insufficient.

"All the aspects of Le Corbusier's personality" should be included in the Pompidou Centre exhibition, Klarsfeld told AFP.

He added that Le Corbusier's anti-Semitic views expressed in his journals were relevant to a 1925 urban plan he came up with — never enacted — which called for Paris's historic centre to be razed and built over with his designs. One of the neighbourhoods included a district that had long been home to Jews in the capital.

Marc Perelmen, a writer who has investigated the architect's ideas for more than three decades and long pointed to his apparent fascism, agreed.

"His ideas — his urban planning and his architecture — are viewed separately, whereas they are one and the same thing," he said.