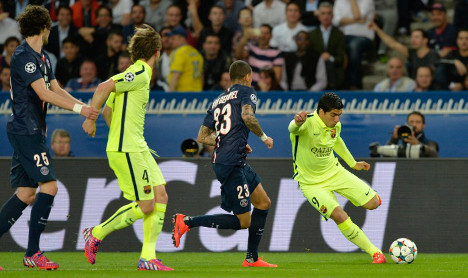 Barcelona's Uruguayan forward Luis Suarez takes aim on Wednesday night. Photo: AFP
The visitors' all-star attack made their class count as Neymar coolly converted from a Lionel Messi assist in the 18th minute to put Luis Enrique's men in control, before Suarez produced two clinical finishes in the final quarter of the game.
PSG got one back eight minutes from time from what was credited as a Jeremy Mathieu own-goal from a Gregory van der Wiel shot, but this was their first home defeat of the season and a first loss at home in Europe in 34 matches since 2006.
Next Tuesday's second leg at the Camp Nou now looks set to be a formality, even if PSG will have talisman Zlatan Ibrahimovic and Marco Verratti back from suspension by then.
"We were superior in midfield, were dangerous going forward and defended well as a team. It was a complete performance from us," said Luis Enrique.
"But we are not going to make the mistake of thinking the tie is finished."
The French champions have been eliminated on away goals at this stage of the competition in each of the last two seasons, including against Barca in 2013, but they will do very well to even make it that close on this occasion.
"I'm not fixated by having possession but when one team forces another back, especially with an attacking trio of their quality, it's difficult," admitted Paris coach Laurent Blanc.
"My players gave everything, which is why they are disappointed. They felt they couldn't do more."
PSG's evening was further marred by the loss of captain Thiago Silva, who hobbled off just after Neymar's opener with a thigh problem.
A dejected Silva walked straight off the field to have his left thigh bandaged up, not even waiting until his fellow-Brazilian David Luiz was ready to take his place.
The former Chelsea stopper was a surprise inclusion in the squad after travelling to Russia for treatment on a hamstring injury that was expected to sideline him for around three more weeks.
But even with Silva on the field, Paris looked uncomfortable against Barcelona's attack. The match was only 14 minutes old when Suarez found Messi on the edge of the area, the Argentine controlling the ball and curling a shot off the left post.
Messi, who has scored 45 goals in all competitions this season, provided a 25th assist soon after, sliding a pass into the path of Neymar, who finished across Salvatore Sirigu with the PSG defence posted missing after Adrien Rabiot lost possession on the right wing.