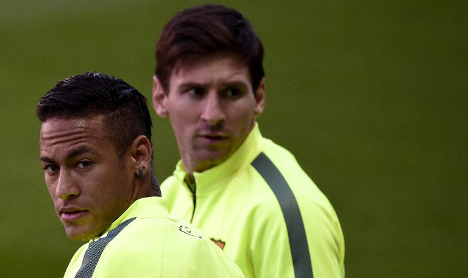 Barcelona forward Lionel Messi (R) and Neymar da Silva Santos Junior. Photo: AFP
The clubs meet at the Parc des Princes with the French champions desperate to make it to the last four after losing to Barcelona and Chelsea in the quarter-finals in each of the last two seasons, both times on away goals.
But their 3-2 win against the Catalans in Paris in the group stage, and the character they showed to beat Chelsea on away goals in the last 16, despite the sending-off of Zlatan Ibrahimovic in the first half at Stamford Bridge, suggest they have what it takes to make the leap forward this time.
"Beating Chelsea, in a stadium where it is very difficult to get a result, showed that we have the quality, so why not do it again," said former
Barcelona defender Maxwell at an eve-of-game press conference at the Parc des Princes on Tuesday.
The Brazilian talked of reaching the semi-finals as a "dream", but he and his team-mates must work out how to avoid conceding a potentially crucial away goal against the potent Barcelona front three of Lionel Messi, Neymar and Luis Suarez.
Asked if the thrilling win against the Catalans last September could be used as a reference point, PSG coach Laurent Blanc responded: "It is one of many games we have looked at to prepare this match.
"We have looked at what we need to do and what we need to avoid doing. We can draw lessons from that game, because we won it and are one of the only sides in Europe to have scored three goals against Barcelona.
"But there are things we need to make sure we don't do, like concede an away goal, especially going away from home in the second leg.
"Lots of teams play Barcelona with the aim of not conceding, but they are a team who can play anywhere in Europe and score goals with the players they have.
"One of the goals they scored here was like something out of the Playstation."
The goal in question was scored by Messi, while Neymar was also on target, but PSG claimed the three points that night thanks to strikes from David Luiz, Marco Verratti and Blaise Matuidi.
Barcelona claimed revenge, and top spot in Group F, by winning 3-1 at the Camp Nou in December, with Messi, Neymar and Suarez all scoring after
Ibrahimovic had put the visitors ahead.
– Motta out, David Luiz in –
While Ibrahimovic is suspended this time, Blanc is faced with the conundrum of how to stop Messi, who scored his 45th goal of the season in Saturday's 2-2 draw at Sevilla.
"People say that, when he only scores 40 goals, he has something wrong with him," said Blanc. "Putting a man marker on him would be the best thing for him and also the best way for us to have a player sent off."
As well as Ibrahimovic, the home side will be without the banned Verratti and Serge Aurier, while Thiago Motta is not fit.
Earlier, Blanc had confirmed that Motta was back in light training after a hamstring injury, but said "a little miracle" would be needed for him to feature in this game.
"Motta has started running again, which is great news because after Marseille a lot of people thought it was serious," said the coach.
However, David Luiz, who like Motta suffered a hamstring injury at Marseille on April 5 that looked set to sideline him for several weeks, is in
the squad.
Blanc also confirmed that Lucas will be involved following his return from two months out in Saturday's 4-0 League Cup final win against Bastia.
Url copied to clipboard!