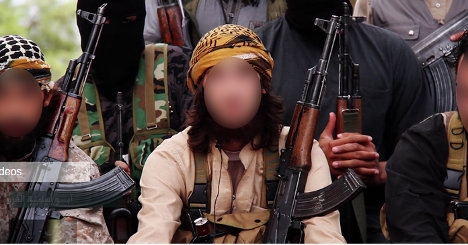 More women are feared to be getting lured by the call of Isis. Photo: AFP
Ever since France introduced a hotline for suspected terrorism back in April 2014, there have been 3,670 tip-offs from the public – most of which come from parents worried their children may be in the process of being radicalized or were preparing to leave for Syria and Iraq.
For the first time ever, the figures in March showed that there were more tip-offs about women than men – with 135 women reported and only 126 men.
While officials refused to go into any further details at a press conference on Tuesday, experts suggest that the switch could be a result of how Isis has shifted its propaganda to target women. Indeed, at this time last year, only 43 percent of the calls were to report women.
Jean-Charles Brisard, the chairman at the Paris-based Center for the Analysis of Terrorism, said the shift was not surprising.
"There are many women in France who are attracted by the call for humanitarian reasons," he told The Local.
"The propaganda made for French audiences shows lots of images of women and children suffering, and these images tend to incite women to act more than men."
He adds that while the videos have a high production value that could be compared to a Hollywood blockbuster, they tend not to show too many scenes of actual combat or religion.
"What strikes me is that they're using Western values to convince people to join their regime," he said.
SEE ALSO: What to do with France's returning jihadists?
Brisard stressed that it was important to remember that the figures only reflected the number of tip-offs, and not the number of women who have actually travelled to Iraq and Syria – an estimated 90 women of a total 400. He added that most of these women were aged between 15 and 25.
Prime Minister Manuel Valls touched on Isis's powers of indoctrination in parliament on Monday while he was defending the much-criticized new laws that would allow spies to hoover masses of data from suspected jihadists.
He announced that seven French people had died in suicide operations fighting for Isis, the youngest of whom was "not yet 20", he said.
"Is Isis deliberately sacrificing these types of people as a matter of priority? Do the candidates for suicide attacks have to prove their ideological zeal to vouch for their conversion?" Valls said.
"In any case, this illustrates Isis's formidable ability to indoctrinate."
As part of its counter-terrorist campaign “Stop Jihadism”, the French government has released a nine-point check list to help people spot someone on the path to jihad, and also a series of videos warning youths how the allure of Syria and Iraq is very different from the reality.
Read also: France launches shock video to 'stop jihadists' Earlier this month, a report from France's upper house Senate revealed that just over 1,430 French people have actually made their way to Iraq and Syria – making up 47 percent of Europe's known jihadists.
French domestic intelligence services are currently monitoring more than 3,000 people suspected of being involved in one way or another in Syrian networks — a 24-percent increase since November last year.
Of particular concern to intelligence services, some 200 have left to come back to France, prompting fears they may stage attacks mirroring the January 7th-9th shooting spree that left 17 dead.
The report noted that 85 French nationals are thought to have died in Isis-held zones 152 Islamist radicals were currently in prison in France.
Authorities are worried about prison radicalization and have unveiled a raft of measures to try and fight this, such as hiring an extra 60 Muslim chaplains on top of the 182 who already work in jails.