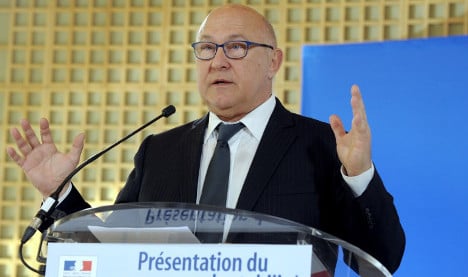 France's Finance Minister Michel Sapin. Photo: AFP
In its so-called "stability programme" that each eurozone country must send to Brussels, France confirmed its budget deficit would be below the limit of three percent of gross domestic product in 2017.
The budget deficit of France, the eurozone's second-largest economy, will stand at 2.7 percent of GDP in 2017, just below the EU bar of 3.0 percent.
"These results show France's ability to clean up its public finances," the finance ministry said in a statement.
Some four billion euros ($4.23 billion) will be trimmed from the budget this year, including through 1.0 billion euros worth of cuts from social security and health spending. The government also expects to save 1.2 billion euros in 2015 thanks to lower servicing costs on public debt.
It is planning another five billion euros in savings next year.
The figures are in France's official economic report to Brussels, which has given Paris until 2017 to clean up its public finances or face possible fines.
Paris forecast however that it will continue to break the rules in the near future, with a budget deficit of 3.8 percent in 2015 and 3.3 percent in 2016.
And it said it would make less of an effort than requested over its so-called structural, or underlying, deficit.
Paris said it would reduce its structural deficit by 0.5 percent per year until 2017, whereas Brussels wanted a 0.8 percent effort in 2016 and 0.9 percent in 2017.
France issued a slightly sunnier outlook for its growth prospects, pointing to "increased competitiveness of our business … the depreciation of the euro, low interest rates and a pick-up in the eurozone."
It said growth would be at 1.0 percent in 2015, rising slightly to 1.5 percent in 2016 and 2017.
These forecasts are "conservative", the government said.
The French economy expanded at a sluggish rate of 0.4 percent in 2014 as the government battled stubbornly high unemployment.
President Francois Hollande has launched a two-pronged attack to tackle joblessness and push for growth.
The first is known as the Responsibility Pact, a series of tax cuts for businesses in return for job creation.
The second is a package of reforms aimed at opening up France's closed economy, including extending the number of Sundays per year when stores can open their doors.
Most economists believe that France needs a growth rate of around 1.5 percent to create jobs.
Hollande has said he will not stand for re-election in 2017 if he does not succeed in bringing unemployment down.