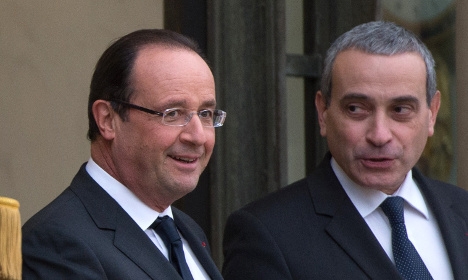 "France has chosen its ambassador to the Vatican. This choice was (Laurent) Stefanini and that remains the French proposal," government spokesman Stephane Le Foll said.

Laurent Stefanini, a senior diplomat and French President François Hollande’s chief of protocol, was nominated for the role in early January.

Normally a new ambassador’s credentials are accepted within a month and a half. The Vatican does not usually explicitly refuse an envoy’s credentials, but a prolonged silence after a nomination is interpreted as a rejection.

The Vatican declined to comment when asked by The Local last Friday if Stefanini, who is openly gay, was being rejected and if this was due to his sexuality.

The French cabinet approved the appointment of Stefanini on January 5th but has not yet received a reply.

"A delay of three months like this is not normal," a well-informed source in Rome told AFP last week.

Stefanini was described by the foreign ministry as "one of our best diplomats".

A French presidential aide had previously said that the choice of the 55-year-old to represent France at the Vatican resulted from “a wish by the president and a cabinet decision” and that the president regarded him as "one of our best diplomats."

French media widely reported that the apparent rejection by the Vatican was because of Stefanini’s homosexuality.

France in 2007 nominated a gay ambassador to the Vatican but the Holy See never responded to the nomination.

Stéphane Lemessin, a French Catholic priest who blogs on faith matters, told The Local previously that he believed the apparent rejection of Stefanini was not solely on account of his being gay.

"Announcing his nomination to the press before presenting it to the Vatican was not the most diplomatic way of doing things," he said.

Pope Francis has taken a far less judgemental position on homosexuality than his predecessor Benedict XVI.

"If a person is gay and seeks God and has good will, who am I to judge?" he said in an interview shortly after he became pontiff two years ago.

He also said that gay people should not be marginalised but integrated into society.

But the change in tone does not necessarily signal a change in the doctrine of the Roman Catholic church.

Francis has criticized gay marriage and is opposed to adoption rights for gay couples, both of which became legal in France in 2013 amid widespread protests from the country's Catholic community.

In 2007, France proposed openly gay diplomat Jean-Loup Kuhn-Delforge to be its ambassador at the Vatican. Paris never received a reply, and it eventually put forward another nominee.

But unlike Kuhn-Delforge, Stefanini is single and is very discreet about his personal life. Italian daily Il Messagero described him as "a practising Catholic, very cultivated, of absolute discretion".

Italy's La Stampa daily's Vatican Insider blog said Stefanini's position on gay marriage – not his sexual orientation – may be the problem in getting the Vatican's green light.

Gay marriage has been legal in France since 2013, despite the Catholic Church's opposition.