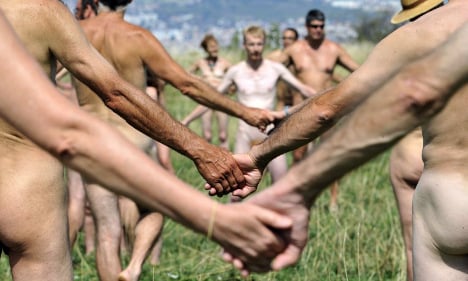 Environmentalists protest nude against the installation of an incinerator in central France. Photo: AFP
How do you get motorists to adjust to a new and reduced speed limit of 30 kilometres an hour?
Councillors in Touillon-et-Loutelet in eastern France think the answer is to show some skin.
In a new ad campaign, the team of ten men and one woman stripped off with only the protection of speed limit road signs. A photo of the group was made into a banner to hang in the town's streets, and was revealed on Monday morning to the no doubt shocked motorists.
Town Mayor Sébastien Populaire told the L'Est Répblicain newspaper that while the idea might sound crazy, it was the team's best idea to get people to take notice. (Photo: L'Est Républicain)
"We decided to lower the town's speed to 30 kilometres an hour, and the best way to communicate this is through shock campaigns. But we didn't want to offend anyone," he said.
He noted that the town was still without a footpath along the main street, and pointed out that around 60 of the town's 150 residents were under the age of 11.
It would be tough to get offended by the council's campaign, however, as the move was about as family friendly as nude photos can get (click here to see all the images from the shoot).
However, the members of the council board were not the first people in France to ditch their clothes in an effort to get their message across and they certainly won't be the last as the French have a fine tradition of naked protests.
According to French sociologist Francine Barthe, who is the author of "The Geography of Nudity – Getting naked somewhere" the urge of protesters to take off clothes is rooted not in the sexual liberation of the 70s or the naturist movement, but the anarchists of the late 19th century who believed that getting naked was an act of rebellion against the state.
Although the tradition seems to live on partly because of the media attention given to naked protesters as opposed to clothed ones – see every stunt by the self-dubbed "sextremists" Femen.
"There's nothing better than an arse or two to attract media attention," as one militant from animal rights group Peta told France's Slate magazine.
"If it works, then why not. The naked girls have a higher impact on men than a cool Panda," said another eco-activist."
Although the danger to the naked protest is that all the bare bottoms distract from the very issue they are trying to bring attention too.
Here is a picture gallery of other recent incidents where people have decided that they'd be best heard without the distraction of clothes.
Oh, and yes, this image gallery contains nudity, and reader discretion is advised.