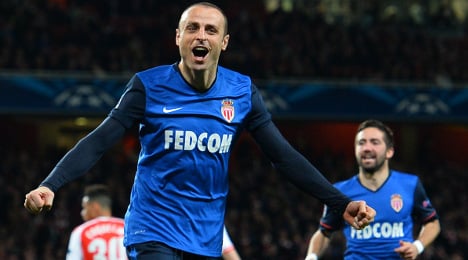 Dimitar Berbatov celebrates after scoring against Arsenal in the previous round of the Champions League. Photo: AFP

Monaco face the Italian champions in Turin on Tuesday hoping to achieve what no other club has done for two seasons in the competition – walk away from Juventus Stadium with all three points.

Even if they score, the Principality side remain at the mercy of a player in Tevez who has hit 17 goals in Serie A this season and scored six in the Champions League.

Raggi told media in Turin on Monday: "Tevez has made the difference for Juventus and he's the number one danger for us.

"He has really impressed me, his pressing, his technical skills. He's the complete player."

Monaco, however, have made the short trip to the northern Italian city looking to leave their mark.

Leonardo Jardim's side swept Arsenal aside 3-1 at the Emirates before securing their place in the last eight on the away goals rule following a 2-0 defeat at the Stade Louis II in the return leg.

Monaco have not featured at this stage of the Champions League since the 2003-2004 season when they went all the way to the final before being humbled 3-0 by Jose Mourinho's Porto.

But Jardim insists they fully merit their place and said his "organized" and "disciplined" team won't be focusing on one player.

"We beat Arsenal in England and we finished as leaders of our group, so there's no doubt we deserve to be here," said Jardim, who made his name while coach of Sporting Braga in Portugal's top flight before spells with Olympiakos and Sporting Lisbon.

"Juventus are a team with a lot of qualities, a lot of experience, and their side is filled with quality players.

"I would say they're favourites for tomorrow and while we'll respect them, we have to go out and focus on playing our game, which is organized and disciplined, but I don't think we should focus on individual players like Tevez.

"He is the top scorer in Serie A, and has the experience and quality and so we have to be careful. But we can't afford to focus on him alone."

For Raggi, the return to Italy will be memorable. He played alongside Juventus midfielder Claudio Marchisio at Empoli, and said the prospect of facing the Bianconeri could cause family friction.

"Obviously playing a quarter-final in the Champions League is already a big satisfaction, but it's even better playing here in my home country," added Raggi.

"When I grew up half my family was for Inter Milan and the other half for Juventus. My family now are definitely all 'Juventini', but tomorrow I hope they'll be supporting Monaco!"