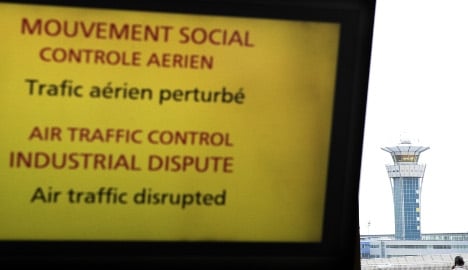 The announcement came after after a "satisfactory" meeting with management over working conditions.

The SNCTA union had planned to go on strike from Thursday to Saturday — following on from two days of industrial action last week that grounded around half the flights in French air space.

The DGAC air traffic civil aviation authority "has given us a satisfactory document," said union boss Roger Rousseau as he announced the lifting of the strike call.

The main air traffic controllers' union, the SNCTA, initially urged industrial action on April 16 to 18 and April 29 to May 2 — key holiday periods.

They are demanding talks over working practices and retirement age, currently set at 59 for air traffic controllers.

Their strike last week forced airlines to scrap around a half of their scheduled flights but passengers were generally well informed in advance and there was minimal chaos.

However union leaders may still decide to stick to their planned strike for the end of the month if talks do not progress to their satisfaction.